What You Didn’t Know About Loving v. Virginia

When the Supreme Court heard arguments in the case Loving v. the Commonwealth of Virginia, defendants Richard and Mildred Loving chose not to appear in person. In 1958, they had been convicted for the felony of miscegenation. As lawyers presented their arguments, 17 states remained steadfast in their refusal to repeal such laws banning interracial marriages. But, though he did not attend the arguments, Richard sent a message to the justices: “Tell the Court I love my wife and it is just not fair that I cannot live with her in Virginia.”

The justices unanimously agreed. On June 12, 1967, proscriptions against interracial marriage were declared unconstitutional.

In the years since, the couple’s victory has often been seen as a touchstone in the fight for black civil rights. The Lovings’ lawyer’s assertion before the court that anti-miscegenation statutes were “ the most odious of the segregation laws and the slavery laws” reinforced this assumption. As historian Peter Wallenstein aptly stated in his book Tell the Court I Love My Wife, “There was no doubt in anybody’s mind as to the racial identities, white and black, of the people who claimed to be Mr. and Mrs. Loving.”

But the Lovings’ public persona was more myth than reality. While researching my book That the Blood Stay Pure: African Americans, Native Americans and the Predicament of Race and Identity in Virginia, I spoke to Mildred Loving, who died in 2008. “I am not black,” she told me during a 2004 interview. “I have no black ancestry. I am Indian-Rappahannock. I told the people so when they came to arrest me.”

At approximately 2 a.m. on July 11, 1958, Sheriff R. Garnett Brooks and his deputies barged into the couple’s bedroom. “What are you doing in bed with this woman?” Brooks barked as he shined his flashlight on the startled couple. Mildred responded, “I’m his wife.” She pointed to the framed marriage license displayed on the dresser. The document read: “Richard Perry Loving, white, Mildred Delores Jeter, Indian.”

The Lovings, who had married in the District of Columbia on June 2, 1958, were in violation of Virginia code 20–54, which declared marriages between “white and colored persons” unlawful, as well as code 20–58, which made it unlawful to go out of state to marry with the intention to return and cohabit as husband and wife. The original legislation, which became the Racial Integrity Act on March 20, 1924, defined a white person as having only Caucasian blood. The Virginia ruling class, however, claiming descent from Pocahontas and John Rolfe, successfully lobbied the legislature to revise the definition to include what became known as the “Pocahontas Exception,” meaning that those with no more than 1/16th American Indian ancestry would be legally considered white.

This loophole was tested in two landmark 1920s cases in which the defendants convinced the courts that they were of white-Indian only ancestry and therefore not in violation of the law when they married white people. In 1930, legislators, fearing that blacks would use the Indian claim to subvert the law, restricted the Indian classification to reservation Indians on the Pamunkey and Mattaponi Reservations in King William County, the nation’s oldest reservations. Numerous non-reservation citizens claiming an Indian identity circumvented the restriction by marrying in Washington, D. C., where they were able to obtain marriage licenses with the Indian racial designation.

Mildred Loving was no exception. Her racial identity was informed by the deeply entrenched racial politics of her community in Central Point, Va. Residents were well aware of Virginia’s racial mores, which encouraged citizens with mixed African-Indian heritage—like Mildred Loving—to choose to identify as anything but black. By the time the state had passed the Racial Integrity Act, there was a deeply ingrained history of the denial of African ancestry. As longtime resident Marshall Wingfield stated in The History of Caroline County (1924), “It is said that the predominating blood in them is that of the Indian and white races.” Outside of their community, those light enough to pass for white, did. Darker residents attributed their complexions to American Indian ancestry.

When I asked Bernard Cohen, one of the Loving lawyers, about Mildred’s racial identity, he denied knowing that his client identified as Indian. “That news to me,” he stated, “she always insisted that she was black.” Perhaps while her lawyers insisted that she was black, Mildred insisted she was Indian; but how could the legal team present a case aimed to dismantle the last of the slavery laws to a Supreme Court that viewed this issue only in terms of black and white?

Indeed, the Loving v. Virginia case goes far beyond the black-white love narrative begun a half century ago. In some ways, the Supreme Court triumph—the anniversary of which we now mark—did represent the simple victory of love over hate. And yet this case is also a reminder that history is often more complicated than it looks. 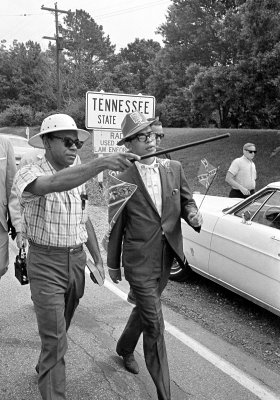 James Meredith on What Today's Activism Is Missing
Next Up: Editor's Pick