Witnesses described a terrifying and bloody scene following a fatal mass shooting in Tel Aviv that left four dead and six wounded, the latest in an ongoing series of Palestinian attacks that have killed 32 Israelis and two Americans.

The attack occurred on a busy Wednesday evening just before 9:30 p.m. at the popular covered Tel Aviv food market, Sarona.

According to a barman, two men dressed in suits and wearing ties ordered brownies at the Max Brenner chocolate restaurant, before carrying out the attack. Without touching the food, they got up, pulled out their weapons and opened fire on pedestrians near the restaurant and in nearby streets, said Yousef Jabari, a member of the restaurant’s staff.

Avraham Liber, who was sitting at Max Brenner restaurant eating ice cream with friends, said he was facing the shooter when the attack occurred.

“I saw him, it looked like he was sitting in a chair at the cafe and he had a rifle in his hand. He was just shooting point blank at people. He didn’t say anything.”

A manager of a nearby clothing store, Meital Gonen, recounted chaos and horror as civilians raced to escape the shooting.

“We heard gunshots and then we saw people running into our store and they said that there was a terrorist — please open the door. They were screaming and yelling and there was a lot of blood and people dying.

“We opened the door to let people in to make sure they were safe.”

Footage captured on CCTV inside Sarona Market showed diners fleeing a restaurant as they heard shots being fired. Ten ambulances from Magen David Adom arrived at the scene and paramedics treated the casualties. Seven of those wounded were evacuated to Ichilov Hospital in Tel Aviv and another was taken to Sheba Medical Centre, in Tel Hashomer. Of the six wounded, four are in a serious condition, but a senior medical official at Ichilov Hospital said three of the seriously wounded victims had stabilized.

One of the shooters was captured by police. The other was seriously wounded by gunfire and among those taken to Ichilov Hospital, but he was alive when TIME sought an update on their condition. Photos released after the attack showed “Carl Gustav” submachine guns, a type of homemade weapon that has repeatedly been used by Palestinians in shootings since last October.

Israeli police spokeswoman Lubna Samri said in a statement that the shooters, both 21, whose names were yet to be confirmed, were two Palestinians from the same family, possibly cousins, from Yatta, south of Hebron in the occupied West Bank. Israel’s Channel 2 reported one of the shooters was on a Shin Bet suspect list. Senior Hamas leader Ismail Haniyeh praised one of the shooters, calling him a “hero”.

Police boosted patrols around crowded areas in Tel Aviv following the attack and Israeli forces raided Yatta, a town near Hebron where the two men were reportedly from, shortly after midnight. Prime Minister Benjamin Netanyahu, returning from a trip to Moscow, landed in Israel soon after the shooting and convened an emergency security briefing.

This latest assault comes after eight months of Palestinians attacks have resulted in the deaths of 32 Israelis and two Americans. About 200 Palestinians, most of them attackers, have also been killed.

This is the third attack of the year for Tel Aviv. On Jan. 1, 29-year-old Nashat Milhem from a northern Israeli Arab town opened fire outside a bar in Dizengoff Street in Tel Aviv killing two Israelis and a Bedouin taxi driver an hour later.

In March, 22-year-old Palestinian Bashar Massalha killed U.S. citizen Taylor Force and injured another 10 after going on a rampage along the Jaffa waterfront walkway. 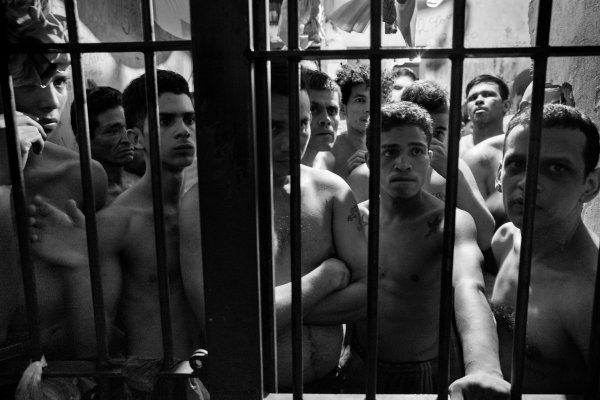 Inside the Hell of Venezuelan Police Prisons
Next Up: Editor's Pick