Presumptive Republican nominee Donald Trump said in an interview Wednesday that he was “disappointed and surprised” by Republican leaders who criticized his comments about a federal judge as “racist.”

After House Speaker Paul Ryan and Senate Majority Leader Mitch McConnell sought to distance themselves from their party’s standard-bearer, Trump issued a statement Tuesday stepping back from his criticism of U.S. District Judge Gonzalo Curiel. But in an interview with TIME, Trump said he was upset with the GOP leaders.

Trump has questioned whether Judge Curiel, an American citizen born in Indiana to Mexican immigrant parents, can be impartial in a lawsuit against him because of his Mexican heritage.

“Claiming a person can’t do their job because of their race is sort of like the textbook definition of a racist comment,” Ryan said Tuesday.

“It’s time to quit attacking various people you have competed with, or various minority groups in the country, and get on message,” McConnell said later that day.

In his subdued address Tuesday night, Trump didn’t mention the attack on the judge, as he sought to adjust his tone to appear more presidential. Trump told TIME that the new message—and the use of teleprompters as an aid—was to mark the “special moment”—indicating it wouldn’t be a permanent shift for his campaign.

“I felt it was an important time somehow, so I thought I wanted to give a very detailed oriented speech,” Trump said. “By nature when you give a detail oriented speech you’re going to be a little bit more low-key.”

A Trump aide said he hopes to redirect the energy deployed against Judge Curiel toward Hillary Clinton, which would be “more productive.” Trump just so happens to have an event scheduled in Tampa this weekend, which will mark the return of his high-energy events. 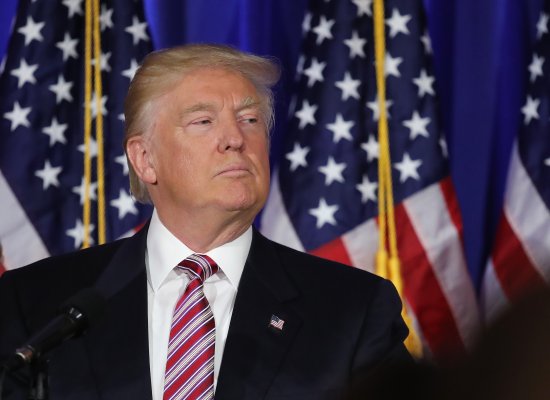 Trump Supported Addressing Climate Change Before Calling It a 'Hoax'
Next Up: Editor's Pick