Why Your Period Tracker Is Wrong

Getting pregnant can be challenging, and website and cell phone apps that help women track their ovulation have become popular tools for couples trying to get pregnant. However, a new study reveals that most of these fertility trackers provide inaccurate fertile windows.

“Doctors I work with were really surprised,” says Dr. Robert Setton of the department of obstetrics and gynecology at Weill Cornell Medical College, who was author of the new study published in the journal Obstetrics & Gynecology. “We all assumed that these are fine and probably accurate, because how could you mess something like this up? It’s so simple.”

Yet of the 53 top websites and smartphone apps the researchers analyzed that predicted a woman’s fertile window, only four—one website and three apps—accurately predicted it.

The medical gold standard for determining a woman’s fertile window assumes that her most fertile days are her ovulation date and the five preceding days. For each of the apps, Setton and his colleagues plugged in a typical cycle of 28 days with four days of menses. They set the last menstrual period to January 1, which put the date of ovulation at January 15, and the fertile window was January 10-15. If the apps matched the fertile window calculated by the researchers, they deemed the app accurate.

Some of the apps did not specify a single day of ovulation, though the ones that did were generally accurate. Eight of 10 of the websites that gave an ovulation date named it correctly, and 20 out of 23 apps that gave a date also got it right. All of the websites and apps included at least one fertile day in their predicted window. Still, there was wide variance in the predicted fertile windows. One app predicted a 12-day fertile window, while two apps and two websites predicted a four-day window.

Given that the prediction of a fertile window is largely based on math, it’s hard to say why the apps wouldn’t get it right. “It’s your day of ovulation, plus the five days prior. Some appeared really arbitrary and some had really wide gaps of 10-day windows. Some were narrower than usual,” says Setton. “None of them really tell you how they are coming up with this. There doesn’t seem to by any rhyme or reason.”

And there’s a potentially high cost to getting it wrong. Including days that are too early in the cycle could alter a couple’s ability to get pregnant, since many will abstain from sex for several days before the fertile window starts to increase sperm concentration, the study authors note. Having a predicted fertile window with days after ovulation also doesn’t help. “This all may lead to patients having intercourse in patterns that will not maximize their chances of conceiving,” the authors write.

Setton says some of the apps may not be associated with a medical institution and may not be using the gold standard measurement to determine fertility. However, while most of the apps didn’t get the fertile window perfectly correct, the researchers cannot say whether using the apps will or will not help a couple get pregnant.

“I think people look at these and assume they are accurate or correct, and this shows that’s not the case,” says Setton. “Anyone that’s trying to get pregnant should be in consultation with their OBGYN to talk about ways to maximize their chances.” 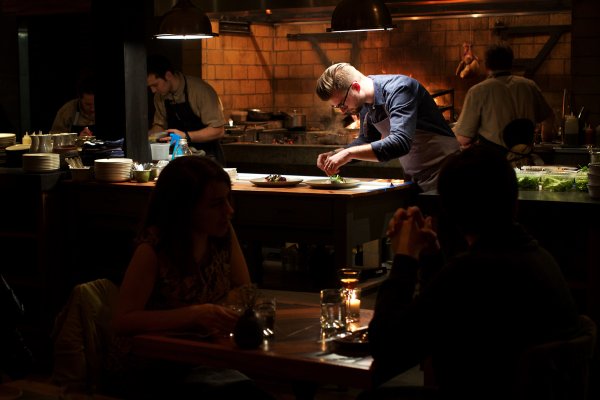 Here Are the 10 Best New U.S. Restaurants: Food and Wine
Next Up: Editor's Pick