Long before most Republican insiders realized that Donald Trump was for real, Alex Castellanos was sounding alarms about the businessman’s upstart campaign.

A veteran GOP strategist, Castellanos was an early and searing critic of Trump’s. Last August, he wrote an op-ed for CNN decrying Trump as a “strongman” who was “not a Republican or a conservative. If we want to keep our future in our hands, we shouldn’t put it in his.” A few months later, Castellanos visited a handful of the party’s biggest donors, pitching a plan to kneecap Trump’s ascendant campaign. According to the New York Times, which first reported on the shelved proposal to create a group called ProtectUS, Castellanos went as far as to produce sample ads casting Trump as a danger to the country.

So some fellow conservatives were surprised when they learned that Castellanos had recently agreed to work for Rebuilding America Now, a new super PAC dedicated to electing Trump as President. “It’s pathetic,” says a senior GOP strategist who requested anonymity to preserve professional relationships. “How does he look in the mirror?” (Castellanos didn’t respond to an attempt to reach him for comment, but he told the New York Times that the decisive factor was Hillary Clinton. “My choice is now binary,” he said. “Either I support her, or I support him.”)

And he is hardly alone. As the campaign progresses, a growing number of erstwhile Trump critics are cashing in as paid boosters for his campaign and its outside allies. And the trend has Republicans who remain bitterly opposed to the billionaire developer fuming.

The tide of anti-Trump turncoats began with Sam Clovis, an evangelical college professor known as a kingmaker in the conservative precincts of Western Iowa. Clovis began the 2016 race as the Iowa state director for Rick Perry. In that role, he regularly savaged Trump, calling him a “cancer on conservatism,” questioning his integrity and criticizing comments that Clovis said “reveal no foundation in Christ, which is a big deal.”

But when Perry’s campaign fizzled, Clovis leapt at the chance to become Trump’s national co-chair, serving as a critical bridge to evangelicals in the first-in-the-nation caucus state. “He’s a person of deep faith,” Clovis effused. And he has been handsomely rewarded for this reassessment: in just the first six months after joining the campaign in late August 2015, Clovis was paid more than $98,000 plus some expenses, according to federal filings.

It’s not uncommon in the course of a presidential election cycle for operatives to join up with a campaign they once bashed when their first horse drops out of the race. And Trump—who for months subsisted on a staff that could practically all fit inside his gold-plated Cessna—has been steadily snapping up strategists who once counseled his primary opponents.

Former Trump critics have also found roles to promote him outside the campaign. In early June, the Republican National Commitee hired Helen Ferré, a veteran Hispanic journalist and former adviser to Jeb Bush, for a key post handling Latino outreach. The job opened up when Ferré’s predecessor quit, reportedly due to discomfort about promoting a candidate who supports a border wall and says an American judge with Mexican parents should be barred from presiding over a class-action lawsuit against Trump. Ferré once had similar reservations: she declared Trump’s immigration position “absurd,” called him “crazy” on Twitter and accused him of instigating violence.

Castellanos isn’t the only onetime Trump skeptic now ensconced at a super PAC promoting the candidate. Ed Rollins, another longtime Republican strategist, copped to being “a cynic at first” about the unlikely Republican nominee. He’s questioned Trump’s skeletal campaign apparatus, questioned his decision to feud with Pope Francis and rapped him for repeatedly breaking the GOP’s 11th commandment: thou shalt not speak ill of a fellow Republican. “Ronald Reagan would be appalled by the tone of this campaign,” he told students at Eureka College, Reagan’s alma mater, during a visit in February.

Now Rollins is raising millions for Great America PAC, a big-money group that bills itself (incorrectly) as “the official Super PAC supporting the election of Donald Trump.” 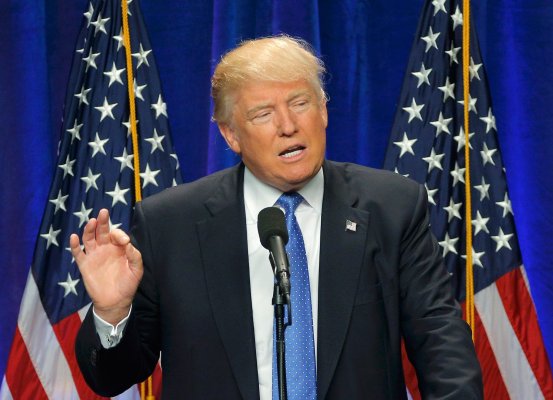 Donald Trump Pushes for Muslim Ban
Next Up: Editor's Pick