The Tense Relationship Between Japan and the U.S. Military

The imposition of a total alcohol ban on all U.S. sailors in Japan, following the arrest over the weekend of an American sailor on drunk driving charges, has brought into renewed focus the sometimes tense relationship between the U.S. military and its Japanese hosts.

There are more American soldiers based in Japan than in any other foreign country. Around 54,000 U.S. military personnel are stationed there, with a mission is to keep the peace in the Pacific. But the American military presence has clouded bilateral relations — nowhere more so than on the tropical island prefecture of Okinawa, which has the heaviest concentration of U.S. military bases. Here’s what you need to know.

Why Japan? After Japan’s defeat in World War II, the U.S. occupied the country and devised a constitution that prevented its erstwhile enemy from forming a normal military. While Japan spends lavishly on its defense, the nation cannot form an offensive force. Instead, the U.S. promises to defend Japan, and its soldiers on Japanese soil add muscle to this obligation. (The U.S. also has a large military presence in South Korea.) Japan’s Prime Minister Shinzo Abe would like to amend the constitution and allow for a more traditional military, especially as tensions proliferate with China. But the majority of the Japanese public remains skeptical of the constitutional change that would be required.

Why Okinawa? Originally an independent kingdom called Ryukyu, Okinawa was absorbed into Japan by the late 19th century, even though its populace is culturally distinct from that of the rest of the country. The end of World War II brought immense tragedy to the tropical island chain at the tail end of the Japanese archipelago. In the Battle of Okinawa, the Japanese imperial army compelled local civilians to resist the Allied assault and even commit mass suicide. Around 150,000 Okinawans perished. The Americans, who after the war scattered military bases across the coral-fringed islands and occupied Okinawa for two decades longer than the rest of Japan, were originally welcomed by some locals as an improvement over the Japanese army. But local opposition to the U.S. presence has grown—even as the Japanese government presents Okinawa as a bulwark against a potentially more assertive China.

Why the anti-American sentiment? Although rare, crimes committed by American soldiers and contract workers against Okinawan civilians have crystallized opposition against the U.S. bases. In May, an American military contractor was arrested on charges related to the murder of a 20-year-old local woman. The stabbing death has conjured up memories of the 1995 kidnapping and rape of a 12-year-old Okinawa schoolgirl by three U.S. servicemen. U.S. President Barack Obama, who visited Japan last month, expressed regret over the alleged murder by an American. On Sunday, Okinawa police arrested an American sailor on charges of injuring two people in an alleged drunk-driving accident, prompting the alcohol ban both on and off base. “It is imperative that each sailor understand how our actions affect that relationship, and the U.S.-Japan Alliance as a whole,” said Rear Admiral Matthew Carter, the head of the U.S. naval forces in Japan.

Will U.S. troops stay? For years, Okinawan politics has been dominated by the base issue. The latest question is whether a U.S. Marine air station located on prime Okinawa real estate will be relocated to a new facility in a less-populated area or whether the base will be shuttered altogether. In Sunday’s assembly elections in Okinawa, the antibase faction consolidated its majority. But previous efforts to significantly counter the U.S. military presence — even when briefly supported by a Japanese central government controlled by the now opposition — have failed. Of course, if Donald Trump, the Republican contender for the U.S. presidency, has his way, local debate over Okinawa bases could be moot. In a primary-season debate, Trump said that U.S. allies, like Japan and South Korea, should pay all costs of maintaining American bases on their soil — or else risk the U.S. pulling its troops. 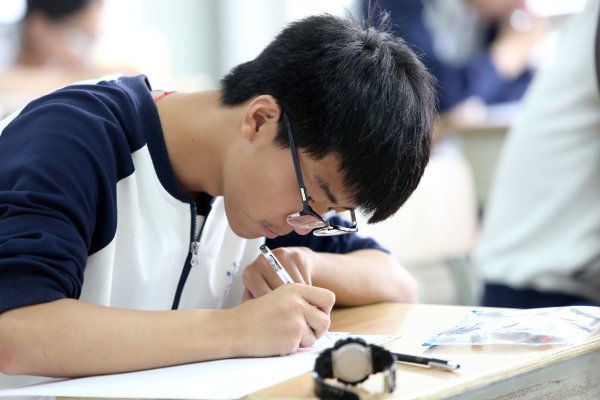 Chinese Students Face Up to 7 Years in Prison for Cheating on College-Entrance Exams
Next Up: Editor's Pick