Hillary Clinton Nods to History as She Seeks to Make It

Inside the waterfront warehouse in Brooklyn, supporters stood for more than three hours waiting to hear the first female major-party nominee speak. From the start, Hillary Clinton’s speech was a nod to the history she was making. As she began, standing under enormous American flags, she paid tribute to the early suffragettes.

“A small but determined group of women and men came together with the idea that women deserved equal rights,” she said. “We all owe so much to those who came before. Tonight belongs to all of you.”

But it was also a time to pay attention to the present. Clinton was deferential to her defeated primary rival, Vermont Senator Bernie Sanders, praising his supporters for joining the political process and pushing progressive issues to the fore. She nodded to his crusade against money-in-politics and income inequality. But she also noted that the campaign was over.

“We all need to keep working toward a better, fairer, stronger America,” Clinton said. “We believe that we are stronger together, and the stakes in this election is high and the choice is clear.”

And she also looked ahead to the future, urging Sanders’ supporters to link arms with her to fight presumptive Republican nominee Donald Trump, even though they were still stinging from the loss. “I know that feeling well,” she said, a nod to her 2008 loss to Barack Obama.

In fact, the speech quickly pivoted to Trump, another New Yorker she will spend the next five months fighting.

Clinton clearly was ready to start her general election against Trump, criticizing his positions on immigration, women and the economy. In strong terms, she criticized Trump’s rhetoric as dangerous and misguided. “We are a big-hearted, fair-minded country,” Clinton said. “We are better than this.” It was a pitch to moderates and conservatives who have yet to accept Trump as the GOP nominee.

Pointing to the thousands of voters whom she met on the campaign, she said she has learned about the struggles of Americans. “So many of you feel like you’re out there on your won that no one has your back. Well, I do. I hear you. I see you. And as your President, I will always have your back,” she said.

Clinton also paid tribute to her late mother, Dorothy Rodham. In her later years, Mrs. Rodham lived in Clinton’s Washington, D.C., home with her, often serving as her unofficial counselor and therapist. “My mother believed that life is about serving others. She taught me never to back down from a bully,” Clinton said of her mother, who died in 2011.

She noted that her mother was born on the very day that Congress passed the constitutional amendment that gave women the right to vote. “Don’t let anyone tell you that great things can happen in America. Barriers can come down,” Clinton said.

One barrier certainly fell Tuesday night, with Clinton passing Sanders in the number of pledged delegates, those party activists who are determined by the outcomes of voting. That development was all but certain to mute Sanders, who has repeatedly suggested that Clinton was circumventing voters by leaning on superdelegates to win.

“This is our moment. So, please, join our campaign,” Clinton said, speaking to the audiences watching at home. “Help us organize in all 50 states … The end of the primaries is only the beginning of the work we are called together.” 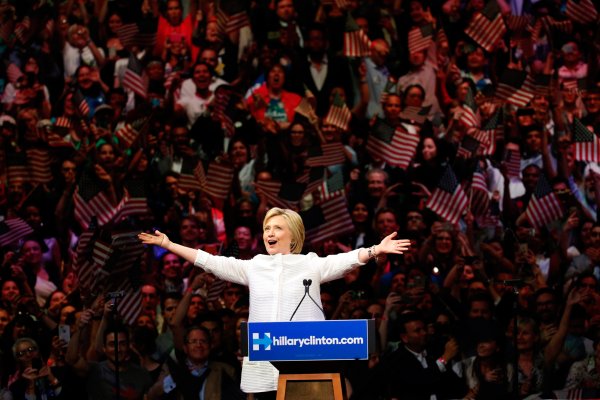 Clinton Stands on the Shoulders of Other Female Candidates
Next Up: Editor's Pick