Last night, The Bachelorette promised a dramatic two-part show starring Chad, who is alternately described as half-douche/half a-hole and a garbage person, or as JoJo’s one true love (he’s talking about himself there.) When we last saw Chad, he was getting a talking-to from Chris Harrison who drew the line at violence. (Read last night’s recap here.) Chad promises not to punch any more doors or grab any more v-necks. Evan, clad in an impressive statement necklace, isn’t buying it. Chad proves he has turned over a new leaf by telling him not to start anything with him.

The Pool Party: JoJo cancelled the Rose Ceremony, opting for a more low-key pool party. To kick things off, she does shots with the men and gets them drunk enough to do some synchronized swim moves. The security guard circles, unable to prevent Evan from giving himself a bloody nose. Chad eats some meat in a corner. JoJo canoodles with Jordan, she then talks to Chad, and then Evan (undoubtedly sent by the producers) interrupts him again. Chad gets mad at that.

The Bachelorette Milestone: Jordan admits he is starting to have feelings for JoJo. Yes, he’s surprised that it has happened so fast.

The Drama: Chad overhears Derek explaining the presence of the security guards to JoJo (it’s Chad’s fault!) and Chad decides to talk to him about it in an aggressive manner. Loud talking betwixt muscled men ensued. It was very dramatic.

The Rose Ceremony: Evan, some guy whose name I forgot, and James Taylor already have roses. Over a chorus of disembodied voices of men saying Chad wouldn’t get a rose, JoJo hands the first rose to The Firefighter, followed by Derek (a.k.a. the poor man’s John Krasinski), Jordan, Luke, Robby, Wells, someone they just snuck in, a James, Vinny (who may have bagged my groceries today), Damn Daniel and Alex. Chris Harrison announces the final rose and according to Chad, he should get the rose. JoJo hands the rose to Chad. Don’t pretend you’re surprised. That means Chad stays while cute Christian, Ali, and some person named Nick who may have just accidentally wandered onto the set head home.

The First Date: JoJo has evicted her heap o’ hunks and sent them into the woods to think about what they’ve done (and for a change of scenery, although the state is never mentioned so the tourist board must not have coughed up the marketing bucks). Date Cards have followed them to their new mystery destination and the first one-on-one date goes to Luke. They ride a sled through the woods despite the fact that there is no snow on the ground.

The Bachelorette Milestone: Hot tub alert! JoJo and Luke chill out in a hot tub in the woods. Then they go eat dinner and talk about how attractive and sexy they think they are. Luke tells her about dropping out of Columbia (or some other “Ivy League New York City institution”) and enlisting in the military. Then he tells JoJo that what brings him peace is staring into her eyes or some other thing he cribbed from his mom’s Harlequin collection, and they make out before heading to front row seats at a Dan + Shay concert with hundreds of imported fans screaming around them. Meanwhile, back at the house, Chad suggests not poking the Chad Bear:

Group Date: JoJo takes a bunch of the guys (a James or two, some Chase/Robby/Daniel types and, of course, Jordan) to go play football with Ben Roethlisberger, Hines Ward and Brett Keisel. At the field, Jordan slips Ben Roethlisberger his card and reminds us all that he is a former pro football player. They do some warm ups, pretend they are Pittsburgh Steelers and JoJo gives Big Ben the play-by-play of her dating life. Evan starts bleeding again (is he of royal blood?), James Taylor ends up in a full body cast for a head injury, and then the games begin. It’s white against blue and JoJo, of course, is the stakes. The White Team is ahead until Evan hits the field dressed like Left-Eye Lopez and they all fall over laughing. Blue comes from behind to take the win and after an impressive buzzer beater touchdown, Jordan asks an intern to send the tape to the NFL.

The After Party: Robby, whose only recognizable trait is hair that hasn’t moved once this season (perhaps chlorine damage after all that competitive swimming?), declares his love for JoJo and she interviews that he is “a man.” Jordan realizes that he needs to open up or risk losing the championship ring … er, engagement ring. So he tells her he is falling for her and she falls for it.

The Two-on-One Date: JoJo in her infinite wisdom has decided to pit Alex vs Chad in a battle to the death. Oh wait, no, Chris Harrison draws the line at violence. Instead they go on a two-on-one date with JoJo. Alex puts on his American flag socks for the occasion. Before Chad leaves, he tells Jordan that he has a very particular set of skills and if Jordan doesn’t stop talking to him, when the show is over, he will look for him, he will find him, and he will yell at him in his face. Then the chopper shows up and Alex and Chad fly to meet JoJo in the woods. She takes them for a hike with a surprising number of sharp objects around. Alex tells JoJo that Chad threatened her boyfriend (Jordan) and JoJo asks Chad for answers — he has none — but she remembers his mom passed away six months ago and seems poised to forgive him. Proving his villain status, the producers cut to a clip of Chad littering. As JoJo thinks, Chad goes to confront Alex for tattling on him to JoJo, saying that he’s not mad, just disappointed and then yells some more. JoJo gives the rose to Alex because even she can’t keep up this charade anymore and sometimes the good guys win (especially when they are Marines wearing American flag socks.) They return to the house, leaving Chad to fend for himself in the woods, which isn’t exactly an island in a hurricane but it will do.

But wait, there’s more … Chad walks through the woods and knocks on the door. To find out what happens next, tune in next time. 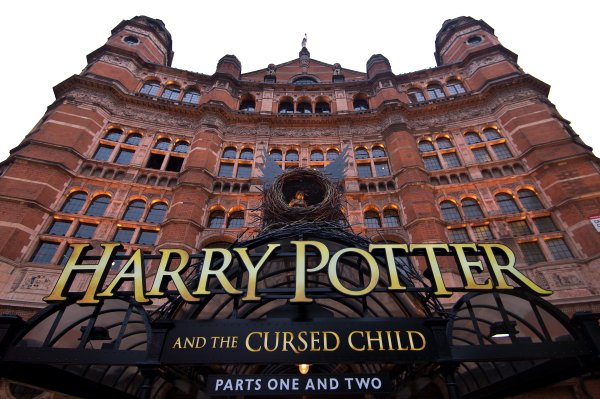 Fans are Spellbound by Harry Potter and the Cursed Child
Next Up: Editor's Pick