Donald Trump said Tuesday that his controversial comments about Judge Gonzalo Curiel have been “misconstrued” as an attack on Mexican and Hispanic people.

The statement, released Tuesday afternoon, marked the first time Trump has backed down from criticizing Curiel, who is presiding over the class-action lawsuit against Trump University. The presumptive Republican nominee has repeatedly argued that Curiel has an “absolute conflict” of interest because of his Mexican heritage, given Trump’s promise to build a wall on the Mexican border. Curiel is an American, born in Indiana to Mexican immigrant parents.

“It is unfortunate that my comments have been misconstrued as a categorical attack against people of Mexican heritage,” Trump said. “I am friends with and employ thousands of people of Mexican and Hispanic descent.”

“I do not feel that one’s heritage makes them incapable of being impartial, but, based on the rulings that I have received in the Trump University civil case, I feel justified in questioning whether I am receiving a fair trial,” the statement says, adding that Trump does “not intend to comment on this matter any further.”

Before Tuesday’s statement, Trump had doubled down on his criticism of Curiel in recent interviews. “This judge is giving us unfair rulings,” Trump said in an interview with CNN last week. “Now I say why. Well, I’m building a wall, OK? And it’s a wall between Mexico, not another country.” He also said it was “possible” that a Muslim judge would be biased against him because of his proposal to place a temporary ban on Muslims entering the U.S.

The statement also follows a press conference earlier in the day in which Republican House Speaker Paul Ryan said Trump’s remarks were “the textbook definition of a racist comment.” Other Republican leaders in recent days have also condemned Trump’s remarks about Curiel, including Illinois Sen. Mark Kirk, a Republican, who on Tuesday retracted his previous commitment to support the party’s nominee. Jeb Bush, Trump’s former adversary in the GOP primary, panned the real estate mogul’s statement shortly after it was released.

“Donald Trump should retract his comments, not defend them,” Bush Tweeted. “There is no place for racism in the GOP, or this country.” 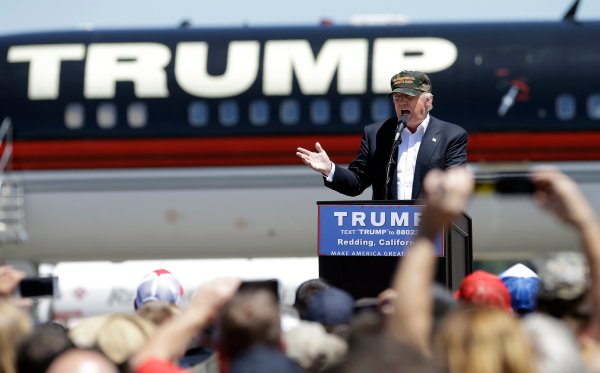 Donald Trump Says He 'Broke the Glass Ceiling' for Women in Construction
Next Up: Editor's Pick