Something odd is happening in late night on CBS.

James Corden, the host of the 12:35 a.m. Late Late Show, was asked in a recent interview whether he’d like to take over the network’s flagship Late Show from Stephen Colbert, who began the job less than a year ago. He said all the right things, of course—namely, “That’s never going to happen”—and it’s worth considering that interviewer Howard Stern is a noted provocateur. Still, the mere fact that the question could be credibly asked feels like uncomfortable news for the network, and for the man who was supposed to be its flagship star.

Colbert, though in my view the best of the three major late-night hosts, has had a rocky entry onto the network scene after hanging up his Colbert Report faux-conservative persona. Coming in to replace the well-established and immediately identifiable David Letterman, Colbert has seemed at times ill at ease with the anachronistic demands of being a late-night host, like interviews. A New York Times piece on Colbert’s “uneven” first eight months cited an interview with Casey Affleck as particularly grim: “Neither acted as if he wanted to be there for the too-familiar promotional exercise.” Outside the realm of celebrity, he also hasn’t found a voice on politics nearly as strong as the one he used to such great effect on Comedy Central. The appointment, in April, of a new executive producer suggested that the network wanted what Vulture’s Joe Adalian called “a set of outside eyes.”

But while Colbert has seen some challenges, Corden has done nothing but win. On the night of the Super Bowl, when both CBS late night shows followed the game, Colbert seemed at times unsteady in his live broadcast, while Corden sucked up all the next-day press coverage with an edition of his wildly popular “Carpool Karaoke” segment and a Pepsi-ad parody with Cindy Crawford. (“Carpool Karaoke,” whose Adele edition got 107 million views online, also got its own primetime special.) The CBS upfront, an annual presentation directed at advertisers, placed Corden front and center as he opened the show with a parody of Hamilton, the frontrunner at this year’s Tonys (which he will host); Colbert got less time, later on. He is behind NBC’s Seth Meyers in the ratings, but Corden, bolstered by a huge following online, certainly feels as though he has a great deal of momentum.

Which leads to an uncomfortable situation, whereby CBS’s biggest star doesn’t quite feel like their biggest star. After all, if timeslot distinctions are growing less and less relevant—if fans, in the millions, can tune into a “Carpool Karaoke” video on YouTube—then what makes Colbert senior to Corden at all? Corden’s recent appearance on Colbert’s show seemed like an attempt to redress the balance, with Colbert mockingly dropping a pen every time the ebullient Corden dropped a name. The distinction between the pair’s worldviews—one a charming cynic, the other simply a charmer—couldn’t have been clearer.

And the onus to answer these questions will stay on Colbert, who’d do well to lean yet harder on the sort of bits that work best for him online (and, coincidentally enough, are the best): His interviews with newsmakers like DeRay Mckesson or Tim Cook. Being forced to prove one’s worth day-in and day-out—the unglamorous work of a host—isn’t comfortable. But left unresolved, questions like Stern’s tend to blossom. Jay Leno used to say he’d never return to The Tonight Show when Conan O’Brien took it over, too. 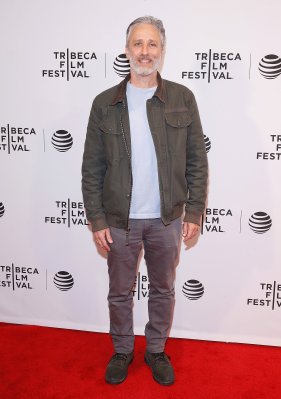