U.N. Experts Condemn Duterte's 'Incitement to Violence' in the Philippines

Rodrigo Duterte has not yet taken office as the President of the Philippines after winning an election on May 9. But the tough-talking Davao City mayor has already gotten into a spat with the U.N.

Two independent experts who advise the U.N.’s Human Rights Council on Monday condemned recent comments made by the President-elect.

Duterte has pledged to give law enforcement shoot-to-kill powers, and has been linked to the motorcycle death squads who roam his home city, executing suspected criminals. He insists journalists are “not exempted from execution,” and says that most of the scores of reporters killed with impunity in the Philippines in recent years were themselves corrupt.

“A message of this nature amounts to incitement to violence and killing, in a nation already ranked as the second-deadliest country for journalists,” Cristof Heyns, the U.N.’s special rapporteur on summary executions, told reporters in Geneva, according to a U.N. press release. “These comments are irresponsible in the extreme, and unbecoming of any leader, let alone someone who is to assume the position of the leader of a country that calls itself democratic.”

David Kaye, the special rapporteur on freedom of expression, says Duterte’s comments could “be understood as a permissive signal to potential killers that the murder of journalists is acceptable in certain circumstances and would not be punished.”

“This position is even more disturbing when one considers that Philippines is still struggling to ensure accountability in notorious cases of violence against journalists, such as the Maguindanao massacre,” Kaye adds, referring to the still unsolved 2009 mass murder when a group of 57 people, many of them journalists, were killed en route to cover the registration of an opposition candidate in an election.

Duterte has generally shrugged off censure for his comments. Responding last week to international criticism, including from media, he attacked the idea that his policies might be held up to the standards of U.N. conventions. “F-ck you U.N., you can’t even solve the Middle East carnage … couldn’t even lift a finger in Africa,” he said, according to the Philippines-based Inquirer newspaper. “Shut up, all of you.” 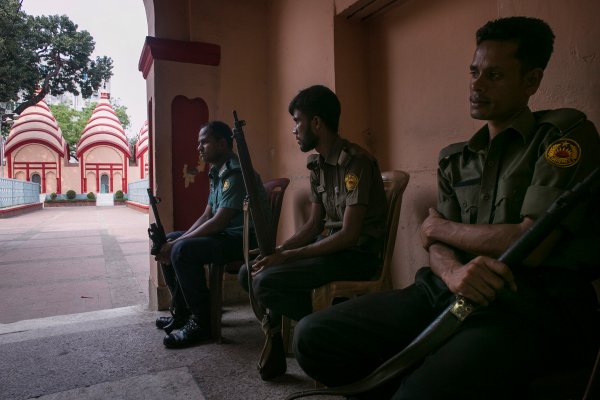 Hindu Priest Murdered in Bangladesh
Next Up: Editor's Pick