Welcome back to The Bachelorette where JoJo Fletcher’s path to love is taking her straight through Hurricane Chad. As the dawn breaks on Bachelor mansion the camera zooms in on all of Chad’s meat plates that are still littering the house. This is probably a metaphor for marriage, but there are undoubtedly many more to come as JoJo continues looking for love on reality TV.

First Date: JoJo invites Chase to “get physical“, which was a great opportunity for an Olivia Newton John themed-dance party, but was actually the world’s strangest yoga class (and that includes yoga done on horseback). The private lesson started with an “anger-gasm” where JoJo and Chase had to thrust their pelvis and yell, “Hate!” So, you know, typical pre-coffee morning ritual. Then they get in touch with their inner Sting and get a little tantric, and while they are straddling each other, they suddenly feel “a connection,” so they start making out in class. Later Chase tells JoJo that marriage is forever and she totally agrees so she hands him a rose, the symbol of love or at least temporary tantric connection.

The Bachelorette Milestone: Private concert! Lady Antebellum’s Charles Kelley performs a very, very intimate show just for Chase and JoJo. Before they can awkwardly slow dance in front of the band, Chase is anointed as the Bachelorette contestant who has to repeat “this is my favorite band” until a producer says it’s believable enough.

Group Date: When the Group Date card is announced, Chad growls that he doesn’t really want to go, which didn’t go over well when Jubilee jokingly said it on last season and goes over less well now. That kicks off battle royale, Chad vs. Everybody, part 17. Evan, the Erectile Dysfunction Specialist, thinks Chad is walking, talking male genitalia and, well, as an Erectile Dysfunction specialist, he would know. When Jordan gives him a hard time, Chad calls him a washed-up footballer who has done nothing more than throw a leather ball around. Alex the Marine tries to take him outside, but instead they all just go on a date with JoJo. For the date, JoJo takes them to a sex storytelling event where each of the men must mime their sexual exploits for the entertainment of the crowd (and JoJo). Since this show is on ABC, the details were tragically sparse, whittled down to a group of grown men admitting that they had sex once. Evan decided to use his moment to exact his revenge on Chad by implying that he uses steroids. To prove he is even-keeled and not on steroids, he half choked Evan in front of JoJo, punched a door, says he will murder someone if he can’t lift weights, and made it his mission to destroy Evan.

The After Party: At the after party, which appears to be held in an antique store, JoJo takes some alone time with Jordan first and he tells her that he has learned from his past mistakes. Because he reached that important developmental milestone, she makes out with him. Chad walks around drinking whiskey and making everyone feel awkward, while interviewing that he’s actually a really nice guy. Chad loiters around everyone’s alone time with JoJo to offer his Statler and Waldorf-style commentary on Damn Daniel, Grant the Firefighter and some other people who are probably named James. When it’s Evan’s turn, he decides to use his alone time to deliver an ultimatum to JoJo — if Chad stays, he goes. Talk about a lose-lose for JoJo. She doesn’t kick Chad off the show, but does give Evan the Date Rose and a peck on the lips. After pinning the rose on Evan, Jo Jo goes to sit and talk with the men. Chad just stares and shakes his head at the rose pinned to Evan’s leather jacket. He’s so obviously murderous that even JoJo notices and asks him what his problem is. He just can’t handle the fact that she chose Evan. He gets weird and aggro and basically becomes a walking Just Say No to steroids ad. JoJo is not impressed.

Second Date: JoJo takes James Taylor to go swing dancing. It’s adorable, and James Taylor is a big old good-natured galoot who is obviously way too nice for JoJo. Even she is aware that he’s too nice for her, and interviews that she hopes he can shake off his sexy Sunday School teacher vibe and they can whip up some chemistry. They talk, she reminds him that Ben said he loved her, he plays her a conciliatory song on his guitar, and they make out. He earns the rose, and a spot in her heart.

The Drama: Back at the house, the producers make sure to film the security guards patrolling the property just in case Chad starts ‘roiding out. In a well meaning attempt to ameliorate the situation, Chad’s one friend, Damn Daniel, offers him some friendly historical advice: “Maybe be not so much like Hitler and be more like Mussolini, ya know?” Man, when your only friend compares you to Hitler, it must hurt a little bit. Well, if you’re even remotely self aware.

Then, Chris Harrison drops by to show off his preppy pink shirt and shiny new spray tan. He announces that JoJo has cancelled the cocktail party, because she wants to have a pool party instead. As Chris Harrison leaves, Evan chases him out to tell him that he doesn’t feel safe with Chad in the house. Chris Harrison pulls Chad out for a talk. He warns Chad that drama is great, but violence and threats of violence are lawsuits waiting to happen. He suggests that like many kindergartners before him, he find a way to use his words. Chad heads back to the house to throw some meat around.

Come back tomorrow to find out what happens next. 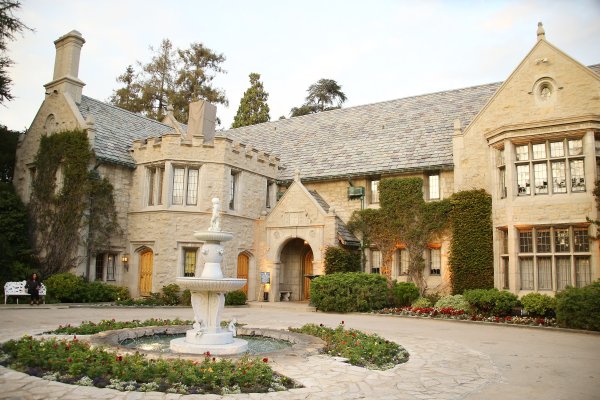 The Playboy Mansion Will Be Sold to Its Next-Door Neighbor
Next Up: Editor's Pick