The 4 Biggest Announcements Apple Is About to Make

Apple CEO Tim Cook speaks during an Apple special event at the Yerba Buena Center for the Arts on September 12, 2012 in San Francisco, California.
Justin Sullivan—Getty Images
By Lisa Eadicicco

Apple is gearing up to give fans and investors a peek at what’s next for the Cupertino, Calif.-based company. Starting on June 13, Apple’s annual Worldwide Developers Conference, or WWDC, will give the firm a chance to share updates on the iPhone, Mac, Siri and more.

As usual, WWDC comes on the heels of Google’s own developers conference, during which the search giant emphasized its advancements in artificial intelligence. Apple is expected to make similar announcements, including improvements to Siri that would make the virtual assistant more useful.

Here’s a look at what Apple might reveal during its opening keynote, set for June 13 at 10 a.m. PT.

Siri is set to be the star of Apple’s show. Apple is preparing to open up its voice-enabled assistant to third-party developers, The Information reported last month. That would let iPhone users access all sorts of apps and services through Siri, like ordering a pizza or requesting an Uber pickup.

Adding this new functionality would be a major leap forward for Siri, likely making it more useful. With its last major iPhone software update, Apple introduced buttons that allow users to jump between apps without having to return to the home screen. Letting Siri access apps would be the next evolution of that concept, making it even easier to multitask.

Ari Roisman, the CEO behind video messaging app Glide, is already thinking about ways to integrate Siri into his app. “The killer use case is saying, ‘Hey Siri, Glide Jim and tell him I’m running five minutes late,” says Roisman.

Apple’s approach to opening up access to Siri will likely look different than that of its competitors, says Mark Hung, a research vice president at Gartner. “[Google, Amazon, and Microsoft] are all coming at this from a very strong cloud background,” says Hung. “They’re building their foundation on two things: the cloud and machine learning in the cloud. With Apple, it’s very different; it’s very much on-device.”

Apple may also bring Siri compatibility to the Mac for the first time, as Apple watcher Mark Gurman, formerly of 9to5Mac, previously reported. Gurman reports that Siri would be accessible through an icon in the Mac’s menu bar, but Apple may include a keyboard shortcut as well. “[That] would be interesting because the Mac has more processing horsepower than any of the iOS devices,” says Hung. “With how heavily Siri relies on the device’s capabilities, it would be interesting to see if Siri would be more powerful on the Mac.”

Apple traditionally uses WWDC to unveil major iPhone and iPad software updates. It’s probable Apple will do the same during this year’s event, with Siri enhancements as the headlining feature. Some news outlets have reported on two other improvements that may be coming as well: a redesigned version of Apple Music and a new payments service.

The updated iteration of Apple Music is said to feature a simpler design that focuses on text with a black and white background, which would be a notable departure from the app’s current, highly visual interface. Apple also intends to incorporate 3D Touch controls into Apple Music and make the “For You” section, which includes recommendations, easier to navigate, reports Gurman.

Apple is also reportedly working on a person-to-person payments system similar to Venmo, as The Wall Street Journal reported in November. If Apple is planning to launch such a service with its next iPhone update, which could potentially be a new feature in Apple Pay, we could hear about it during the WWDC keynote.

Additionally, Apple CEO Tim Cook told BuzzFeed News last year that the company may allow iPhone owners to remove default apps that they don’t use, like the Stocks app. That would solve a major gripe among some iPhone users, but Apple hasn’t confirmed when or if this ability will become available.

Based on past experience, it’s possible that Apple will unveil the next iteration of its Mac desktop and laptop software at WWDC. While Siri integration is expected to be the most significant new addition, reports have indicated that Apple will rename the operating system “macOS” to make it more consistent with its other platforms, like iOS (iPhone, iPad), watchOS (Apple Watch), and tvOS (Apple TV.)

iTunes for Mac may get a design overhaul echoing the changes coming to Apple Music, Gurman has also reported. The core features in iTunes are said to remain the same, despite rumors that Apple may remove the ability to download actual music files via the software, moving instead to an entirely streaming-based service.

Apple tends to use WWDC to talk about smaller future updates, too. There’s a chance we’ll hear about what’s next for the Apple Watch and Apple TV, for instance. Hung expects these to be fairly “minor” announcements, however, so don’t expect to see a new Watch or other overhauls.

There’s been some speculation that Apple will introduce a smart device similar to the Amazon Echo. But Hung says “there’s no way” Apple will unveil such a product at WWDC even if it’s in Apple’s pipeline. On a more minor note, Hung believes there’s a chance we may see a refreshed MacBook Pro that incorporates Touch ID, as well as a new AirPort Extreme wireless router.

There are two ways Apple could approach the launch of the new router, says Hung. Either Apple will incorporate features that allow it to connect to smart home devices in Apple’s HomeKit ecosystem, or it will be an incremental update that simply refreshes the hardware. If it’s the latter, Apple may just add the new router to its online store without mentioning it during the keynote. “That’s the only possibility for Apple introducing some kind of smart home device this year,” Hung said in reference to the potential for a HomeKit-enabled router. 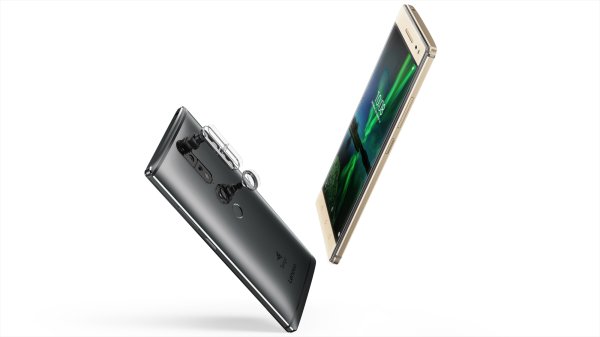 This Google-Powered Gadget Could Be the Future of Smartphones
Next Up: Editor's Pick