This Game of Thrones Theory May Reveal Arya Stark's Fate

One of the biggest surprises of the seventh episode of Game of Thrones‘ sixth season came when Arya Stark (Maisie Williams) was brutally stabbed by the Waif after the nameless girl snuck up on her disguised as an old woman. After receiving multiple wounds, Arya was able to escape her attacker’s hold long enough to jump over the side of the bridge on which they were standing. She then stayed underwater long enough for the Waif to presume she was dead before emerging to straggle through the streets of Braavos.

While this scene seemed to bode extremely ill for the young Stark, many fans believe that not all was as it appeared. Specifically, some are speculating that Arya’s behavior before the attack indicates her actions were all part of an elaborate ruse. “We are led to believe Arya got stabbed, however there are some problems with what happened this episode,” Reddit user iPlayNL wrote. “First off, Arya seemed different from the start. Her scene with the merchant, her walk all seemed very confident, which is unusual after the events this season. … Also, where did she get the money from? Why was she not carrying Needle [her sword] with her? How come after all she knew about the faceless man she just stood there on a bridge not paying any attention?”

Another Redditor expanded upon the same basic theory, positing that Arya’s interaction with actress Lady Crane in the sixth episode was integral to her plan. “We can assume she knows enough from training to figure the waif will attack to the body,” passingwisdom wrote. “So I believe she has 1 or more pigs blood pouches around her body. She knows where and how to do this because last episode… she saved the actress. The actress then provided her help to make the scene on the bridge large and realistic. … She then leaves the water and leaves a trail of blood…. to lead her [enemies] to her. Expecting an unarmed (because she choose not to show needle during the fight scene) and injured girl; they will instead walk down a dark alley and be met with an uninjured girl who knows how to fight in the dark and carrying a sword.”

Others believe the person stabbed on the bridge wasn’t Arya at all, but rather Jaqen H’ghar disguised as her. “That wasn’t [A]rya. She would have been carrying needle,” froschkonig wrote. “She wasn’t aware that [Jaqen] said not to make her suffer, so making a big show of her suffering doesn’t make sense. It was [Jaqen] testing the waif, and by stabbing her in the stomach and not just slashing the throat, she disobeyed orders just like arya did. [Jaqen] is gonna lay some faceless justice down.”

Whatever the truth, the consensus remains that Arya will live to see another day — and hopefully finally make it back to Westeros. 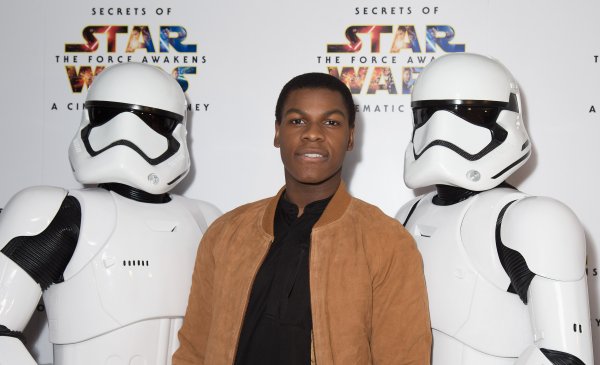 John Boyega To Star in the Next 'Pacific Rim' Movie
Next Up: Editor's Pick