With a Withering Attack on Trump, Clinton at Last Turns a Corner in Her White House Bid

“I gave this speech yesterday in San Diego,” Hillary Clinton started, but could not finish—the crowds in Garden Grove, and later in San Bernardino, Calif., were cheering, loudly and with a tremendous sense of relief. She had finally proved her worth as a candidate; she had trounced Donald Trump, brilliantly, with high-class mockery and disdain, on the most important aspect of the presidency: his fitness to serve as Commander in Chief—not just his ridiculous attempts to articulate a foreign policy but his flagrant ignorance of the world and his reduction of all issues to schoolyard bullying. House Speaker Paul Ryan endorsed Trump at about the same time as Clinton began speaking. But her remarks were so potent that Ryan’s sad concession—a moment that will embarrass him in perpetuity—couldn’t commandeer the news.

Why? Because Clinton used blunt, confident language for a change. There was almost a Thatcherite clarity to her attack on Trump’s foreign policy ideas: “They’re not even really ideas, just a series of bizarre rants, personal feuds and outright lies.”

This was a scolding for the ages. Clinton attacked from a height and with a depth that none of Trump’s Republican opponents were ever able to attain—and he was clearly taken by surprise; his initial response was lame. He criticized the way she read from the teleprompter. (Actually she was pretty good.) The Clinton attack came during one of the toughest weeks of Trump’s campaign, a week when the Trump University fraud allegations went viral, a week during which Trump exposed himself as the crudest of racists, attacking the judge in the case, Gonzalo Curiel, for being “of Mexican heritage” and therefore incapable of presiding fairly. “I’m building a wall. It’s an inherent conflict of interest,” Trump said—as if the judge, born in Indiana, would naturally be in favor of illegal immigration simply because he was Latino. Even Paul Ryan had to step away from that one—a contortion that the Speaker will have to perform again and again between now and November.

Because we know this now: Trump is unable to “act presidential.” He has won the Republican nomination, but he simply cannot summon the dignity or restraint that his new status requires. And we know this too: Clinton knows how to get under his “very thin skin,” a body part more relevant to the job of Commander in Chief than the various other appendages that were introduced during the sordid Republican primary process.

In San Diego, she raised an issue that not even Mitt Romney or Ted Cruz had taken on: Trump’s mental stability. “I’ll leave it to the psychiatrists to explain his affection for tyrants” who have no love for the United States, she said. Indeed, Trump’s soundness of judgment, his very sanity, seemed to be shattering under the pressure of the attacks on his alleged fraudulent university. And Clinton increased the pressure on him in her speech, sentence after sentence, example after incredible example of Trump’s arrant foolishness: his support for the Tiananmen Square massacre; his admiration for Vladimir Putin and Kim Jong Un; his shifting, and feckless, positions on ISIS.

The San Diego speech is a marker, a moment when the 2016 presidential campaign changed. Win or lose in California, Clinton proved herself the candidate best able to make the case against Trump. The confidence of her rhetoric should have sent a message to Bernie Sanders: It’s time for you to suspend your vanity campaign—there is serious business to focus on now.

Clinton certainly seemed a candidate transformed on the day after her San Diego speech. She joked with audiences about Trump; she laid out her proposals with quiet assurance. She didn’t need to oversell; her rhetoric—often too hot, too stagy in the past—was calm and factual, as if she’d finally realized that all she really needed to do was be a rational grownup with an active sense of humor. The more she plays the Thatcher role, the more Trump will seem the petulant child he so clearly is.

The race will twist and turn over the next five months. Clinton will have bad weeks. She still has obvious weaknesses as a candidate and as a human being. But she’s always been able to take a punch, and now, finally, she has demonstrated the ability to land a haymaker. 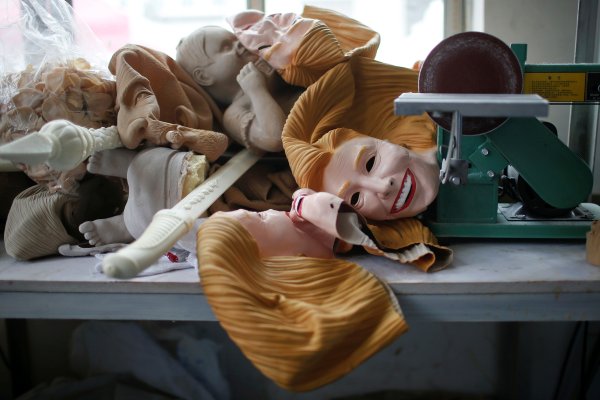