Joshua Wong, left, and Nathan Law in Hong Kong on May 18, 2016 in this handout photo provided by their political party, Demosistō
Handout—;Getty Images
By Casey Quackenbush / Hong Kong

Two of Hong Kong’s leading activists were found not guilty Tuesday morning local time on obstruction charges related to democracy protests that shook the city in 2014.

Joshua Wong, 19, and Nathan Law, 22, were cleared of charges before a packed and sweltering courtroom at the Eastern Magistrates’ Courts as demonstrators flew yellow democracy banners outside. Two other activists appearing in court with Law and Wong were also found not guilty.

Speaking outside the courtroom, Wong told TIME: “I think it’s great that Hong Kong still has an approximation of rule of law and independence.” He added: “The result of this trial is already proof that it’s just a political prosecution.”

Wong wore an open, white button-down shirt over a sea-foam green and blue T-shirt bearing the name of the political party he co-founded with Law and others, Demosistō. The party calls for the people of Hong Kong, a Special Administrative Region of China, to have the right to self-determination — a demand that is anathema to Beijing, which regards Hong Kong’s nascent pro-independence movement as dangerous separatism.

In June 2014 Wong and Law — then respectively the head of student activist group Scholarism and a leader of the Hong Kong Federation of Students — burned a mock-up of a white paper released by the central government in Beijing that condemned Hong Kong’s democracy movement, restricted the right of Hong Kong voters to choose the city’s leader, and reasserted China’s sovereignty over the territory. Prosecutors claimed that when police moved into to douse the flames with bottles of water, an altercation developed. According to local media, one officer testified that Wong and Law prevented him from moving forward.

However, Wong and Law denied obstruction, saying they were pushed by the crowd and could not hear what the officer was saying.

Protests over the white paper, and demands for greater political freedoms in Hong Kong, eventually developed into the Umbrella Revolution — a 79-day occupation of key districts of the city in the fall of 2014. Wong and Law were prominent figures in the occupations, which saw tens of thousands of mostly young Hong Kongers erect tented villages in the shadow of major government and military buildings. The protest was the most significant pro-democracy gathering on Chinese soil since the brutally suppressed 1989 occupation of Beijing’s Tiananmen Square.

Wong — who appeared on the October 2014 cover of TIME’s international edition — faces another hearing later this month, when a verdict will be given on charges of “inciting an uprising.”

He told TIME last week “I expect to pay the price. What I mean is being an activist and involved in civil disobedience, we need to show that we will bear responsibility.” 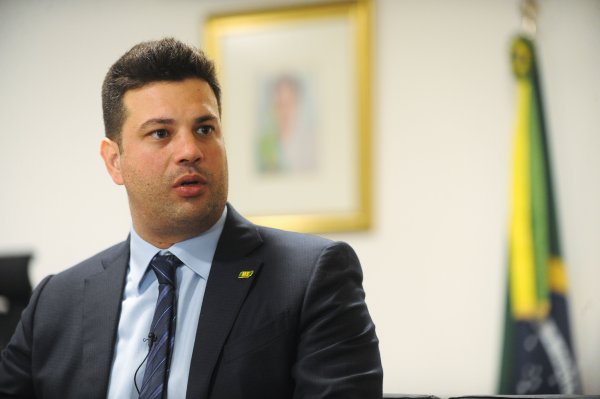 Brazilian Minister: 'Rio Is Ready'
Next Up: Editor's Pick