Before Hillary Clinton took the stage in Sacramento on Sunday evening, drums were sounded furious and fast by percussionists from a local high school. Then Clinton, readying for war with a smile on her face, spelled out her plans for taking on Donald Trump in the 2016 election.

“We’re going to have a very contentious campaign because I am going to point out at every single moment that I can why the Republican nominee should never get near the White House,” Clinton said to cheers of several hundred supporters who waited in 100-degree heat before packing into a gymnasium at Sacramento City College.

Clinton accused Trump of running a campaign based on insults—against Mexican immigrants, Muslims, women and other constituencies, and quoted Abraham Lincoln: “A house divided against itself cannot stand.”

The speech, delivered in advance of the state’s Democratic primary on Tuesday, follows a cutting foreign policy speech on Thursday, in which Clinton portrayed Trump as inexperienced and lacking the temperament to be entrusted with the country’s nuclear codes. Those are themes she continued to hit on Sunday, amid reeling through policy agenda items that pleased the crowd, like promising to tackle climate change and pass gun control measures.

“I believe that Donald Trump is not qualified or temperamentally fit to be president,” she said.

Though Clinton had not technically clinched the delegates she needs to be the Democratic nominee, news broke during her speech on Sunday that she had beaten rival Bernie Sanders in the Puerto Rico primary, bringing her within a few dozen delegates of that horizon. With a double-digit lead in New Jersey, which also goes to the polls on Tuesday, Clinton is expected to be the nominee before polls close here, though losing the liberal bastion could sap her momentum and underscore anew the challenges she has faced exciting voters this year. Some polls have showed a tight race in California.

Like Clinton, most of the surrogates who spoke before she took the stage avoided mentioning Sanders’ name. Sacramento Mayor Kevin Johnson summed up the apparent threat level by politely dismissing the Vermont Senator, saying he’s “doing a good job.”

Speakers instead doubled- and tripled-down on the theme that the “stakes could not be higher” in this campaign, describing it as a choice between a safe-and-trusted candidate who runs on diversity like a car on gasoline, and a divisive, unpredictable cannon who could jeopardize “the future of our country and the future of the world,” as a former ambassador said. California Gov. Jerry Brown’s chief of staff described Trump as “he who shall not be named,” to the crowd’s delight, joking that he liked the sound of his own name too much.

Many of the attendees were avid Clinton supporters, while some were Sanders fans who had come to believe that Clinton is the candidate they’ll need to rally behind. But those present shared a distaste for the Republican alternative. “Hillary has the most incredible experience,” said Margaret Munson, a resident of nearby Penn Valley, Calif. “And she is not a bigoted, arrogant, immature, misogynistic type of person.” 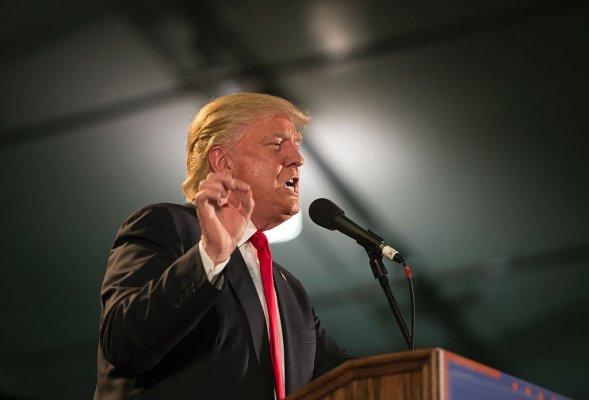 Trump Says 'It’s Possible' Muslim Judge Would Be Biased
Next Up: Editor's Pick