Inside the British Town Where 1 in 3 Are E.U. Migrants

A view of the north brink of Wisbech, England, in September 2012
Chris McHugh—REX/Shutterstock
By Tara John / Wisbech

Ramunas Savickas has invested a lot of time and money on building a new life outside Lithuania. Since moving to Britain in 2005, he has worked as a driver, dishwasher, factory worker and vegetable picker before saving enough funds to start his own business in Wisbech, a rural town 100 miles north of London. Sitting in his restaurant, Smakas, which opened in 2014, Savickas expresses dismay at the very idea of the U.K. leaving the E.U. “I don’t want to think about it,” he says, “it is depressing.”

His anxiety is common among the roughly 10,000 Eastern Europeans, mainly Poles, Latvians and Lithuanians, who have made the rural Cambridgeshire town their home since the E.U. extended its borders eastward in 2004, guaranteeing them the right to work and live in the U.K. They and 2.1 million other Europeans working in the U.K. face an uneasy couple of weeks leading up to the June 23 referendum, when a vote to leave the political bloc could threaten their continuing presence in the country.

The Fenlands, where Wisbech is located, is a flat region in eastern England known for having the most productive farmland in Britain. It has historically relied on seasonal, foreign labor, attracting migrants from across world to spend a few summer and autumn months working in some of the 4,000 farms or food-packaging factories in the surrounding countryside. As a result, Wisbech has become an Eastern European enclave in the heart of rural Britain, complete with a Catholic church offering a Polish Mass, and close to a dozen Eastern European grocery stores and delicatessens selling delicacies such as pickled herring and frozen dumplings.

It is impossible to predict what will happen to this population of immigrants if Britain votes to leave the E.U. on June 23. Immigration has been one of the central issues of the referendum, with a poll by the Observer suggesting that nearly 50% of respondents would cast their vote based on concerns about immigration levels to the U.K. Vote Leave says withdrawal from the E.U. would give Britain the ability to control its borders, proposing an Australian-style points-based immigration system that would apply to both Europeans and non-Europeans wanting to move to Britain.

But the specifics of such a program are vague. The most likely scenario for new migrants under a negotiated free-trade deal between Britain and the E.U. would be stringent requirements to qualify for the most-common visa, says Catherine Barnard, a professor of European law at the University of Cambridge who heads a research project on European immigrants in Britain. Applicants for a Tier-2 visa would need to be sponsored by the company hiring them, hold a graduate degree and earn more than the required salary threshold of more than $30,000.

This would spell trouble for new migrants wishing to join families and friends in Wisbech, where most immigrant workers earn a minimum hourly wage of just $10.35. According to a report by the University of Oxford’s Migration Observatory, the majority of E.U. immigrants currently in Britain would fail current visa requirements for overseas workers, with only 7% of all E.U. migrants in the agriculture, forestry and fishing sector, and less than 30% in the manufacturing sector meeting the threshold.

What happens to them is a matter of conjecture. The Vote Leave campaign has said that E.U. migrants currently residing in the country won’t be deported, but that’s little assurance to some. “The problem is what does that mean?” says Barnard. “Does it mean they won’t be thrown out? Will they enjoy all the rights they currently have?”

Darja Davidova is surprised to hear that there may be a risk to her right to remain if she were required to apply for a new visa. “But we have been here for so long,” says the 29-year-old. Six years ago, Davidova moved to Wisbech from Latvia for a short-term job at Greencore, a food-packaging company that makes supermarket ready meals. Today, she is studying English at the University of East Anglia while supporting herself through part-time work at the Rosmini Centre, a local charity that offers advice and support to migrants. She has made Wisbech her home and is upset that she, like most Europeans living in Britain, cannot vote on June 23.

Initially set up in 2007 as a place for foreign workers to learn English, the Rosmini Centre has seen a sharp increase in European migrants worried about their visa status and mortgages in light of the upcoming referendum. According to Anita Grodkiewicz, the director of the center, there has also been a marked increase in people looking into obtaining British citizenship or permanent residency in the country.

Wisbech’s agricultural and food-packaging sectors are dependent on foreign labor and Grodkiewicz thinks employers would struggle without a fresh supply of European workers, possibly forcing them to turn to black market “gangmasters” who bring immigrants over illegally. “If you are not part of the E.U. and you don’t have all those people … you are going to employ [whoever] you can get hold of,” she says.

That may be of little concern to native residents of Wisbech, who have watched their community go through wholesale changes over the past dozen years, as foreign nationals have come to comprise a third of its population. The transformation has happened so rapidly that there has been little time to adjust: in January, the center-right think tank Policy Exchange named the town the second “worst integrated” place in the U.K. Victoria Gillick, a local campaigner married to a Eurosceptic U.K. Independence Party councillor, told the Wisbech Standard: “By encouraging the immigration of cheap foreign labour, which Fenland authorities endorsed, we have allowed farmers and local multinational food businesses to create an ultra-low-wage economy in Fenland.”

Migrants in Wisbech are aware of such feelings. A Polish butcher on the town’s main square, who did not wish to be named, complains about what he perceives as racism toward migrants, saying that he is considering a move to the nearby town of King’s Lynn. “These people, only problem,” he says before serving an Eastern European customer.

While his restaurant’s non-English clientele enjoy the Lithuanian delicacy of a bright pink, beetroot soup and plates piled with fries and chicken Kievs, Savickas regards the upcoming vote with both fear and resignation. If Britain leaves the E.U., the flow of new customers will run dry. The future of his restaurant and neighboring supermarket, in which he has invested close to $150,000, hangs in the balance. “What can we do?” he says, conceding that even though he wants to “stay here forever,” the decision is in the hands of the British. 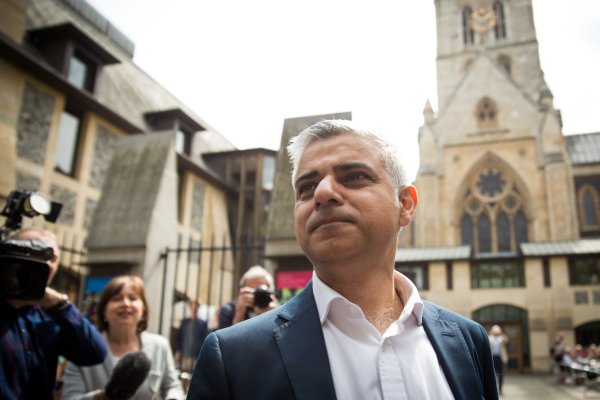