Donald Trump said it’s “possible” a Muslim judge would be biased while presiding over the Trump University case in a new interview after saying U.S. District Judge Gonzalo Curiel’s Mexican heritage prevents him from acting fairly in his role in the civil fraud proceedings.

The presumptive Republican presidential nominee stood by his belief that it’s “common sense” that a judge’s heritage would affect how he rules amid Trump’s ongoing rhetoric about building a wall between the U.S. and Mexico during an appearance on CBS’ Face the Nation that aired Sunday.

He previously said Curiel had “an absolute conflict” in presiding over civil fraud proceedings against Trump University. Curiel was born in Indiana to parents who came from Mexico, according to the Associated Press. “He is a member of a club or society, very strongly pro-Mexican, which is all fine,” Trump told CBS’ John Dickerson. “But I say he’s got bias. I want to build a wall. I’m going to build a wall.”

When Dickerson asked Trump if he thinks a Muslim judge would also treat him unfairly because of his proposal to temporarily bar Muslims from entering the country, Trump said: “It’s possible, yes. Yeah. That would be possible, absolutely.”

“You know, we have to stop being so politically correct in this country,” the mogul later added. “And we need a little more common sense, John. And I’m not blaming. I’m proud of my heritage, we’re all proud of our heritage. But I want to build a wall.”

Senate Majority Leader Mitch McConnell and Foreign Relations Committee Chairman Bob Corker—who both have endorsed Trump—said they do not condone the billionaire’s comments Sunday in separate interviews on political shows. 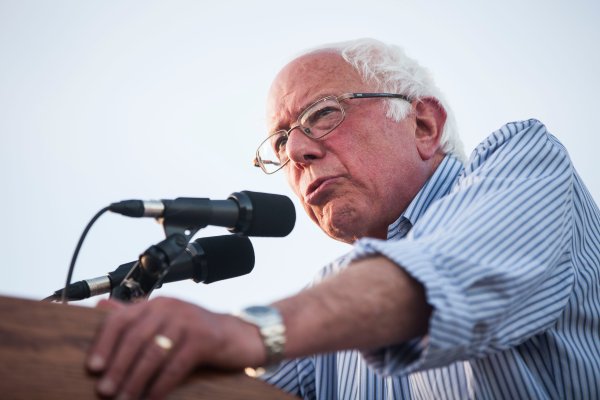 Bernie Sanders: Democratic Convention Will Be Contested
Next Up: Editor's Pick