“In our enthusiasm to show the villainy of the character Apocalypse we didn’t immediately recognize the upsetting connotation of this image in print form,” Fox said in a statement. “Once we realized that how insensitive it was, we quickly took steps to replace those materials. We apologize to anyone offended by our actions.”

The scene in question occurs during the third act of X-Men: Apocalypse, and was featured prominently in the film’s trailers. The poster and billboard were slammed online, most vocally by actress Rose McGowan.

“There is a major problem when the men and women at Twentieth Century Fox think casual violence against women is the way to market a film,” McGowan told The Hollywood Reporter. “There is no context in the ad, just a woman getting strangled. The fact that no one flagged this is offensive and frankly, stupid.”

McGowan isn’t the only person offended by the ad. Last month, a New York blogger posted a photo of the ad at a New York subway station, defaced by eight pieces of paper spelling out “this violence in my kid’s face is not OK.” Others criticized the ad as well, including Jennifer McCleary-Sills, director of gender violence and rights for the International Center for Research on Women. “I’m glad that a bit of a stink has been raised about this and that people are being provoked to think about why this image isn’t OK and why [the studio] could’ve done better,” Sills told THR.

X-Men: Apocalypse, the current No. 1 movie in America, could be the last one for Lawrence. Her contract is up after appearing in three X-Men features. “[Michael] Fassbender and [James] McAvoy and I were all talking,” she said to EW of the film’s other prominent stars whose contracts have run out, “Like, ‘Will you come back?’ ‘I dunno.’ ‘I’ll come back, if you come back.’ Fox should be terrified because the deal we made was like if one of us doesn’t come back, none of us are.”

This article has been updated. 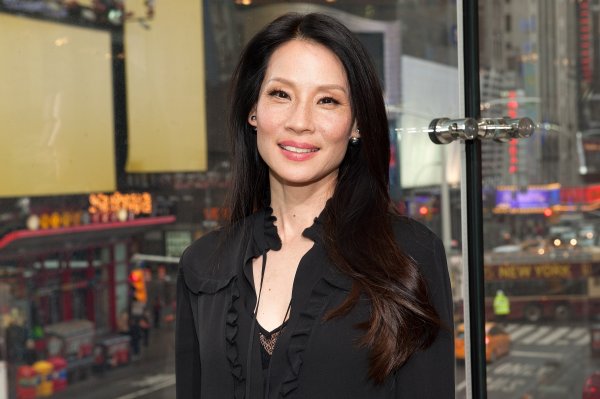