President Obama delivered his last commencement address of the 2016 graduation season at the U.S. Air Force Academy Thursday, which also happened to be his last graduation speech as president.

Over the past seven years, the former constitutional law professor has taken the moniker “professor-in-chief” to heart during annual addresses to students on their way out of the nation’s leading colleges and military academies. In each speech, Obama has delivered broad messages about the society the students will soon enter—a sort of State of the Union address aimed at young people.

“Class of 2016, you are graduating at such an inflection point,” Obama told the graduating class at Rutgers in May. “Fortunately, your generation has everything it takes to lead this country toward a brighter future. I’m confident that you can make the right choices.”

Commencement addresses have provided the president with a unique opportunity. Each has allowed the president to check in with his target audience—coalitions of young people whose first foray into politics were likely his two presidential elections. Young voters helped carry the president to the White House in 2008 and in 2012, Obama received about 60% of the youth vote. According to a post-election analysis by the Center for Research and Information on Civic Learning and Engagement, voter turnout by the under 30-crowd lead to decisive victories for Obama in key states including Ohio, Pennsylvania, Florida and Virginia. But his commencement addresses make clear he expects them to do more than just vote.

“I’m only going to be President a little bit longer,” Obama told Miami Dade College’s Class of 2011. “You are going to be leaders for many years to come. You will have to make choices to keep our dream alive for the next generation.”

When the president mulled comprehensive immigration reform in 2011, he delivered a commencement address at Miami Dade College where he waxed poetic about how immigrants have shaped America. During 2012’s so-called legislative “war on women,” the president delivered just one address—at Barnard College, a liberal arts women’s college. During that speech he spoke passionately about the contributions of women, and spoke about some pretty powerful women in his own life.

“I grew up as the son of a single mom who struggled to put herself through school and make ends meet. She had marriages that fell apart; even went on food stamps at one point to help us get by. But she didn’t quit,” Obama said in 2012.

There’s a significant gap in the timing between his 2013 speech at Morehouse College, a historically black college for men, and the launch of his My Brother’s Keeper Initiative, but the messages were the same: black and brown boys need guidance from those who’ve made it out of tough situations. In 2014, ahead of the president’s announced actions on climate change at the United Nations summit, the president addressed the issue at the University of California at Irvine, where students and residents were living through the early days of a historic drought.

“I’m telling you all this because I want to light a fire under you,” Obama said of climate change. “As the generation getting shortchanged by inaction on this issue, I want all of you to understand you cannot accept that this is the way it has to be.”

In his 2015 State of the Union Address, Obama proposed free community college for all, so during graduation season where else would the president find himself delivering a commencement address but Lake Area Technical Institute, a leading community college that happened to be in the 5oth state he would visit as president. And this year, during a tumultuous election season defined by the divisive rhetoric of the leading Republican presidential candidate the president speeches have stood to contrast presumptive Republican nominee Donald Trump’s notion that America needs to be made great once more.

Though the president has delivered his last address and wished his final class well while in office, the days of President Obama speaking to students are likely far from over. But the days in which they reflect his ongoing work at the White House are now history. 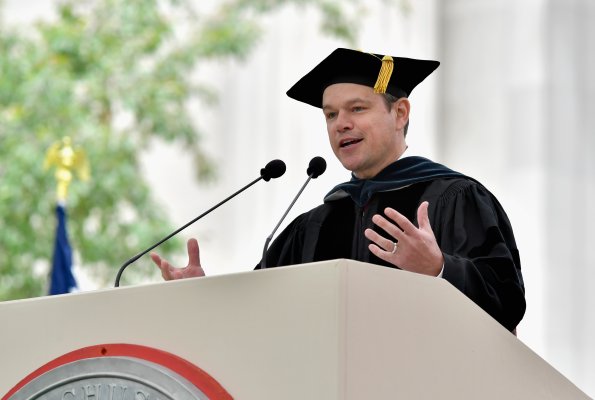