Why People Are So Upset About This X-Men Poster

X-Men: Apocalypse hit theaters last weekend, but fans are talking about more than just the film. Twitter has been flooded with photos of a promotional billboard that features Mystique (Jennifer Lawrence) being strangled by Apocalypse (Oscar Isaac). While some argue that this is just a scene in the movie, others—like actress Rose McGowan—are saying it promotes violence against women.

“There is a major problem when the men and women at 20th Century Fox think casual violence against women is the way to market a film,” McGowan told The Hollywood Reporter. “There is no context in the ad, just a woman getting strangled. The fact that no one flagged this is offensive and, frankly, stupid.”

She also commented on 20th Century Fox’s record of not having released a female-directed movie since 2010 (excluding Fox Searchlight, the studio’s art-house division), as The Wrap reported. “Since you can’t manage to put any women directors on your slate for the next two years, how about you at least replace your ad?”

McGowan wasn’t alone in thinking the billboard was inappropriate: 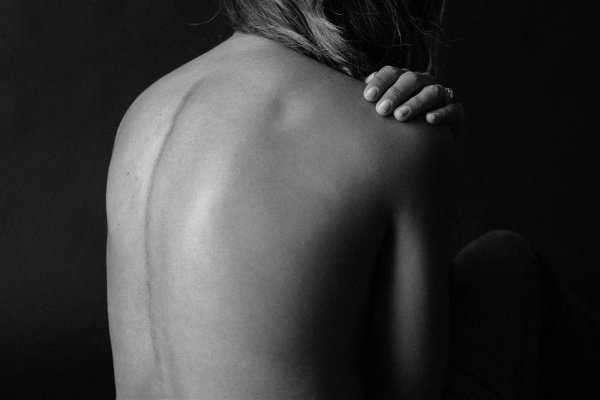 How One Woman Learned to Love Her Scoliosis Scar
Next Up: Editor's Pick