What Uber's Deal With Saudi Arabia Means for Women

In this photo illustration, a woman uses the Uber app on an Samsung smartphone on September 2, 2014 in Berlin, Germany.
Adam Berry/Getty Images
By Dan Primack / Fortune

I am on the record as liking Uber. I like its service, which has revolutionized urban mobility by improving convenience, taking cars off the road, and (most likely) reducing incidents of impaired driving. I’m partial to its swashbuckling style, particularly when confronting taxi interests and municipal regulators who are more concerned with self-preservation than the good of their customers/constituents. And I think that many of the most disquieting complaints about Uber—particularly when it comes to the safety of female passengers—are exaggerated for the sake of grievance clickbait.

But I don’t like Uber right now. Not today. Not after this.

The ride-hailing giant disclosed last night that it has secured a whopping $3.5 billion investment from Saudi Arabia’s Public Investment Fund, and that PIF managing director Yasir Al Rumayyan will join its board of directors.

Moreover, this is no passive investment. By naming political appointee Al Rumayyan, the company has basically invited the Saudi government into its board room. To my knowledge, no other Silicon Valley startup has a director from the sovereign wealth fund of a repressive political regime.

Uber CEO Travis Kalanick won’t publicly comment on any of this (at least not yet), but sources close to the company lay out three basic defenses:

1. This investment is actually good for Saudi women, which make up around 80% of Uber’s current user base in the country. The argument here is about improved mobility, particularly when being able to get to work or school. Unfortunately, it rings very hollow. First, the only reason for the massive gender imbalance in Uber users is because of the aforementioned prohibition against women drivers. Second, Uber already was operating (and expanding) in Saudi Arabia before the $3.5 billion investment. There is no reason to believe this deal will put more Ubers on Saudi roads. Third, Uber sources say that, on the one hand, Al Rumayyan’s job responsibilities are purely financial—but, on the other, that his directorship could give Uber some political influence in Saudi. That’s a surge-priced contradiction right there.

2. Uber needed the money, and where else are you going to get $3.5 billion? No doubt, it must be tough to fundraise after you’ve already tapped out venture capitalists, private equity firms, mutual funds, hedge funds, Wall Street high-net worth clients, and strategic corporate and other sovereign wealth funds (yes, including from noxious Qatar). But there is another option: Go public. Pretty sure Uber could have raised at least $3.5 billion via an IPO.

3. Plenty of other companies, including Apple, cozy up to problematic regimes. Moreover, the Saudi PIF holds shares in all sorts of publicly-traded U.S. companies (and, of course, holds U.S. treasuries). But Uber remains private, meaning that it has full discretion over who does, and who doesn’t, purchase its stock. This is supposed to be one of the side benefits of not going public. And, again, it gave PIF a board seat.

“It goes to the heart of who Travis is,” says one Uber investor. “He just doesn’t give a shit about optics. Ever.”

But this is about more than optics, although clearly the optics of this are worse for Uber than they would be for most any other Silicon Valley startup. It’s about sometimes being willing to make hard choices that might not directly benefit the company in the short term, but could help its customers in the long term. Uber could have easily continued providing Saudi women with greater mobility while simultaneously denying the Saudi government the opportunity for a financial gain until it accelerates reforms.

I’m not so naive as to think that the Saudi government will base policy on the back of a $3.5 billion investment (or lack thereof), but it could have been a decent poke at the dam. But rather than trying to be a maker, it chose to be a taker. 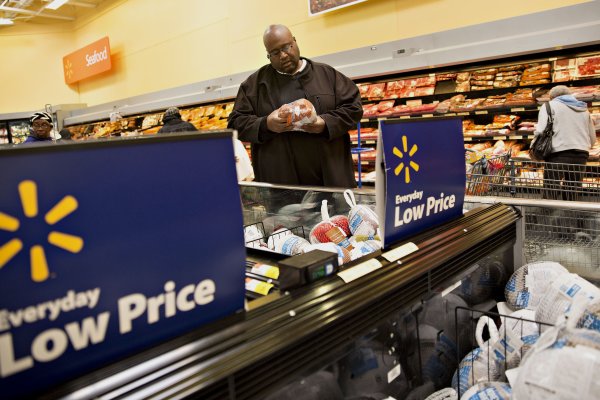 Walmart Wants to Deliver Groceries to Your Door Via Uber and Lyft
Next Up: Editor's Pick