The Way We Interact With Technology Is About to Change Fundamentally

For as long as computers have been part of our lives, we have interacted with them through touch. We’re used to pecking keys, swiping trackpads, and tapping touchscreens to tell a computer we want to open a certain app or visit a specific website.

But it is quickly becoming clear we are entering a new phase of digital interaction as technology giants Amazon, Apple, and Google bet on voice-based systems.

Mary Meeker, a general partner at Kleiner Perkins Caufield & Byers, dedicated an important portion of her annual presentation on the state of the Web to the rise of voice search. To be sure, the technology has existed for decades and been prevalent for several years. Google introduced voice search in 2009, while Apple debuted the voice-activated Siri virtual assistant in 2011. But such software is only now reaching the sophistication at which it is likely to feel truly useful to users.

Meeker argues that, in order to be successful, voice recognition software needs to have 99% accuracy in understanding spoken words. Tech companies are approaching that threshold: Google, China-based Baidu, and startup Hound are already achieving around 90% accuracy, according to the presentation. (Meeker also says such software must deliver answers quickly, another challenge.)

The best evidence yet that people are willing to start talking to their computers has come by way of Amazon. The online retailer in 2014 introduced the Echo, a voice-enabled smart speaker able to answer users’ questions and comply with certain commands, like setting timers or dimming Internet-connected lights. The Echo provides an ambient, voice-activated operating system that’s more or less invisible when not in use. While initially met with skepticism, Amazon is estimated to have sold roughly 3 million units since it launched the Echo, making it a minor but notable hit.

Part of what has made the Echo a success is the way it interacts with apps on a user’s behalf, providing a quicker way to jump between different services than poking at a phone or tablet. By talking to Echo, owners can request an Uber, order a pizza, or—of course—shop on Amazon. Among the most provocative slide in Meeker’s presentation suggested that the popularity of the Echo, when compared to iPhone sales, could reveal an inflection point suggesting the world is ready for a different means of accessing information. Apple, for its part, is rumored to have an Echo competitor in the works, while Google is launching its own similar device called the Home this fall.

As Silicon Valley’s most powerful companies continue to develop the gadgets of the future, voice control is set to emerge as a central feature. And as machines get better at listening to and understanding us, we may find ourselves using our phones less often, preferring instead to get a quick answer from our verbal helpers. After decades of poking and prodding, that will be a fundamental and noteworthy change. 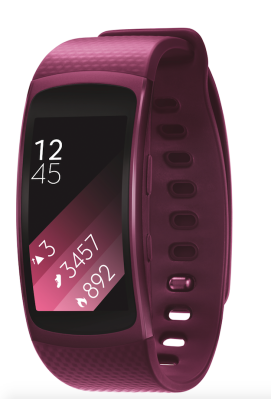 Samsung's Gear Fit2 is a Fitness Tracker That Does Everything
Next Up: Editor's Pick