The flag that Americans will celebrate for Flag Day on Tuesday has a certain neatness to it: complementing the 13 stripes for the 13 original states, there are nine orderly rows of stars, totaling 50. With more than a half-century having passed since the 50-star flag debuted in 1960—following the admission of Hawaii as the 50th state in 1959—Americans are accustomed to the look of this flag.

But, of course, the nation didn’t skip right from 13 states to 50 of them. Though it’s been a while since new states were a common addition, there was a period of time during which the flag changed designs frequently to accommodate new stars for new states. And, as the GIF below shows, while some numbers lend themselves to star patterns that can be a little bit awkward (we’re looking at you, 37 stars), they’re all equally patriotic:

Most changes to the flag have come one state at a time, with the exception of the early years, and 1890 (the Dakotas, Montana, Washington and Idaho) and 1912 (New Mexico and Arizona). The most recent changes came in 1959 and 1960, after the consecutive additions of Alaska and Hawaii.

The design for the 50-star flag has a particularly fun back story: it was created by a high school student, Robert G. Heft. As the Columbus Dispatch reported in Heft’s 2009 obituary, his history class was given the assignment of designing a new flag in 1958, after it became clear that two states were on their way, and he earned a B-minus for the design he made. Though he was not the only person to suggest that 50 stars could be best displayed in alternating rows of six and five, the Dispatch reports that he was the only person to mail a prototype to Washington, where it was selected by President Eisenhower.

And Heft got the last laugh in more than one way: his teacher changed his grade to an A.

“At the Capitol arm-weary policemen raised and lowered 1,072 new flags on four flagpoles so that Congressmen could mail favored constituents new flags authentically flown over Washington in the first day; the cops took about 30 seconds to clamp each flag to the halyard, haul it up and drop it down again into a red, white and blue mailing box,” TIME reported when Alaska’s star was added in 1959. “Next year the whole procedure will have to be done all over again, when the U.S. unfurls its 50-star flag in honor of Hawaii.” 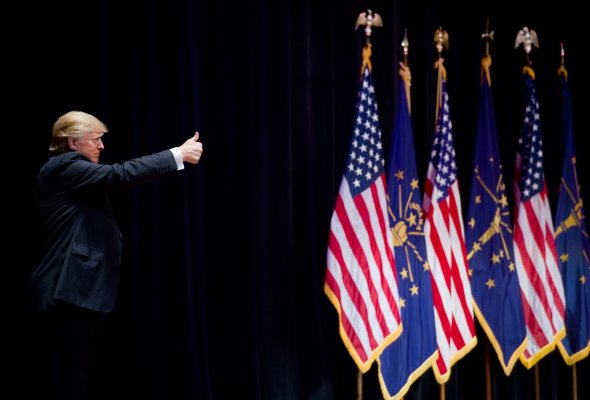 Donald Trump Is Turning 70. Here's What We Can Learn From the History He's Seen
Next Up: Editor's Pick