The Moral Uproar Caused by the 'Professional Beauties' of Early Photography

Before Lillie Langtry (née Emilie Charlotte Le Breton, 1853–1929) became a stage actress, she was known as one of London’s “professional beauties.”

Women who bore this title were famous in large part due to the sale of their commercial photographic portraits. In her memoir The Days That I Knew (1925), Langtry records the wide range of photographic poses of professional beauties available in London’s shop windows: “Anything the ingenuity of the camera-man could devise to produce an original or startling effect was utilized with more or less happy results. Some smothered themselves in furs to brave photographic snowstorms; some sat in swings; some lolled dreamily in hammocks; others carried huge bunches of flowers (indigenous to the dusty studio and looking painfully artificial), and one was actually reproduced gazing at a dead fish!”

The ready availability of such portraits—on the streets of London and within homes—rendered these women seemingly omnipresent. While their features were upheld as examples of ideal beauty, their complicity in the construction of their fame worried some critics about moral decay in the heart of the British Empire. In October 1879, an anonymous author for the Scottish daily newspaper The Dundee Courier & Argus wrote that “When actresses get themselves taken it is excusable; when harlots… are sold from the windows of our fashionable shops, it is understood that they are as shameless as they are good-looking,” but when an upper-class woman such as Cornwallis West “classes herself with the latter, she has only herself to blame if the casual purchaser considers her to be in ‘the same street.’” According to this author, Cornwallis West had disregarded the propriety of her social class and reduced herself “into the same street” as actresses and harlots by allowing herself to be extensively photographed and reproduced.

Some critics posited professional beauties as predators who preyed upon the vanity of women and the indiscriminate lust of men, especially those from the lower classes. According to a critic writing for York daily The York Herald in October 1879, “Every ‘Arry who had a shilling to spend had the privilege of placing a [photograph] of Mrs. Langtry or of Mrs. West underneath his pillow.” The risqué display of skin in some portraits, such as in a cabinet card of Langtry wearing a tightly-laced and low-cut bodice, seemed intentionally designed to appeal to base desires. The Dundee Courier commentator stated that by indulging such desires, professional beauties could not complain if their representations ended up in compromised situations.

A combination of positive and negative press kept the names and faces of these women in circulation, who became in-demand high society celebrities and notable trend setters. Their public self-fashioning challenged expectations of feminine behavior because, in wielding self-promotional mass media tools, they acted counter to a gender ideology in which women were passive and self-effacing. By participating in the production of commercial photographs such as those in the Gernsheim collection, they seemed intimately available to consumers motivated by the fairytales of their fashionable success.

Jennifer R. Henneman recently received her Ph.D. in nineteenth century British and American art and visual culture from the University of Washington. A Ransom Center dissertation fellowship supported Henneman’s research for her doctoral thesis “Her Representation Precedes Her: Transatlantic Celebrity, Portraiture, and Visual Culture, 1865-1890.” While at the Ransom Center, Henneman worked with the Gernsheim collection, studying photographs of London’s “professional beauties.” 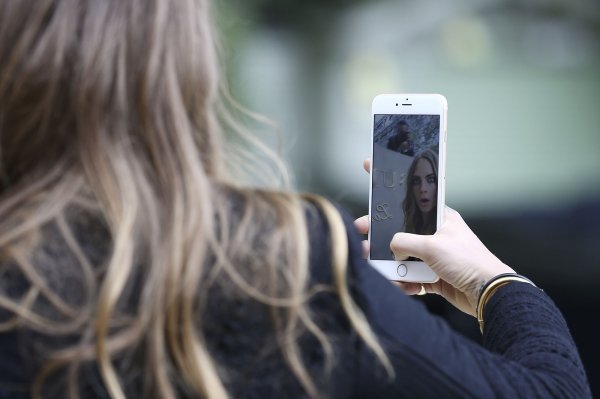 A Selfie Statue Has Divided This Texas Town
Next Up: Editor's Pick