The star and creator of Hamilton—the hit Broadway musical about the life of a Founding Father—said he thinks the 2016 presidential race is “no more bizarre than the election in 1800.”

Lin-Manuel Miranda, who appears on the June cover of Rolling Stone, said he sees parallels between the political debates at the country’s founding and the debates still driving the current presidential campaign.

“The same fights we have over the role of our government now and the size of our government now are the fights they were having. Add the brutality of slavery to that mix as an undercurrent in all of those decisions,” Miranda said during the Rolling Stone interview. “So I guess the biggest takeaway is, yes, this election cycle is bizarre. But it’s no more bizarre than the election in 1800, wherein Jefferson accused Adams of being a hermaphrodite and Adams responded by [spreading rumors] that Jefferson died, so Adams would be the only viable candidate. He was counting on news to travel slow! That, weirdly, gives me hope.”

Read more: Why History Has Its Eyes on Hamilton’s Diversity

Miranda also compared some of presumptive Republican nominee Donald Trump’s immigration policies to the ways immigrants have been treated throughout history.

“I can tell you that Trump’s politics about building a wall, that’s old,” Miranda said. “And it’s such a malignant form of a very common American electoral disease, which is, ‘Point at the newest people here and say they’re the reason you’re broke.’ That’s as old as time itself. That’s ‘Irish Need Not Apply.’ That’s [Pat] Buchanan in the ’90s. And it’s finding purchase with Trump right now.”

Miranda added that he won’t get involved in campaign appearances for Trump or likely Democratic nominee Hillary Clinton in the general election.

“I don’t feel the need to get in the middle of that,” he said. “Just get out and vote.” 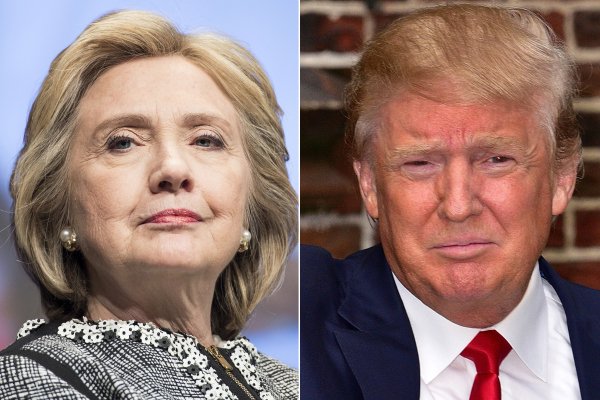 Hillary Clinton Goes on Offense Against Trump University
Next Up: Editor's Pick