The Problematic History Behind One of Donald Trump's Favorite Ideas: Tariffs

Throughout the 2016 election season, presumptive Republican nominee Donald Trump has made clear his admiration for an idea that hasn’t gotten serious play in American politics for nearly a century: tariffs.

Though his official position statement on trade with China clarifies that his “goal is not protectionism but accountability,” he has said that he favors a 45% tariff on Chinese goods. And it’s not just China: he favors a 35% tax on cars made in Mexico and said “who the hells cares” if a trade war is the result of his policies.

Even aside from the fact that many experts have said that such plans would be illegal and detrimental to the U.S. economy, Trump’s pro-tariff stance may sound a strange note to anyone familiar with the role of tariffs (or: taxes on imports) in American history. Though the subject was a controversial and common one in the 19th century, and could play a major role in presidential elections back then, it’s just not something that most candidates—or citizens—really talk about very much anymore.

For an answer, look to the 1930s. Presumptive Democratic nominee Hillary Clinton was correct when she said in a speech last week that “we went down that road” back then. Though questions over the value of free trade haven’t been entirely absent from political discussion since then, you have to go back that far to see a full-on trade war—and to see what happened next. “In the 19th century there had been sporadic trade wars, but I’d call them more skirmishes rather than wars,” says Douglas A. Irwin, author of Trade Policy Disaster: Lessons from the 1930s. “In the early 1930s it really was a massive outbreak of protectionism.”

Even before that decade, the tariff was on its way out. The early 20th century saw two major nails in the coffin of U.S. tariffs, says Joseph J. Thorndike, director of the Tax History Project. Each corresponds with a different function of a tariff: protecting domestic industry (or punishing foreign industry) and raising revenue.

The first factor was that the U.S. economy was finally, about 150 years after the nation was founded, maturing. As U.S. industry became more able to compete on a global level, there was more incentive to help businesses trade freely with potential customers around the world and less of a need to use the tax code to protect them.

The more important issue, however, came on the revenue side: World War I made the tariff stop doing its job. “Tariffs work very poorly as a way to raise revenue during a war, because ships get sunk and ports get blockaded,” Thorndike says. “Tariffs, which depend on a certain volume of trade, start to raise a lot less money.” The federal income tax had been introduced in 1913, right around when tariffs stopped being able to fund the nation and the war. Democrats—traditionally anti-tariff—happened to be in power during World War I, and they were “more than willing to pick up the slack with the income tax,” says Thorndike.

Then, after World War I but before World War II, Republicans—who favored high tariffs—held the White House for several administrations in a row. And even after tariffs had lost their money-making power, they could be used to please certain constituent groups. A turning point for that strategy came in 1930, with the passage of the Smoot-Hawley Tariff, perhaps the last hurrah of the American tariff. “It was done for political reasons,” Douglas Irwin says. “It’s not like the U.S. was being swamped with imports. The Great Depression hadn’t struck in a big way yet. There’s no economic need for it.”

The act raised tariff rates—which were already pretty high—to record levels. As TIME pointed out while President Hoover mulled whether to sign the bill into law, even though many business experts warned that the tariff could be a disaster, the general consensus was that Hoover would sign because “politically he could not afford to do otherwise.” Sure enough, he signed. The tariff went into effect, and played out just as some of the Cassandras had warned. Other countries around the world retaliated (hence, “trade war”) against the United States by imposing their own high tariffs. Plus, the decrease in trade meant that there were fewer international consumers able to buy American goods. The “beggar-thy-neighbor” policy led to what Irwin calls a “downward spiral in trade.”

As a sign of how bad things got, one early-1930s tax law specified that “whenever the President finds that, under the laws of any foreign country, citizens or corporations of the United States are being subjected to discriminatory or extraterritorial taxes” the President could temporarily double certain taxes for citizens and corporations from that country.

Though there remains debate over whether the Smoot-Hawley Tariff had a significant impact on the Great Depression domestically—or if that would have been bad regardless—Irwin says that “there’s widespread agreement that the trade wars of the early ‘30s were disastrous for the world economy.”

After the shock to the world financial system that was the Great Depression and World War II, the tariff’s days were pretty much through. For one thing, as a revenue source, the income tax was here to stay.

For another, Congress no longer had the power to set tariffs—the President had been given that power, to undo the damage—so they lost some clout as a political tool. Then, the General Agreement on Tariffs and Trade, the post-World War II precursor to the World Trade Organization, established international regulations about how and when tariffs could be instituted. Though there remain some tax quirks that would allow punitive tariffs—Joseph Thorndike points out that the current Section 891 of the tax code, which grew out of the 1930s system, still allows punitive taxation (and has gotten some recent attention)—it seems unlikely that Trump’s tariff plan would pan out, even if he were elected. Thorndike says that a “fiscal regime change” is always unlikely without a major revenue crisis, which in the past has usually meant boots-on-the-ground war.

“That, to me, is the central fact of the fiscal history of the U.S.,” Thorndike says. “Things don’t really change until they have to.” 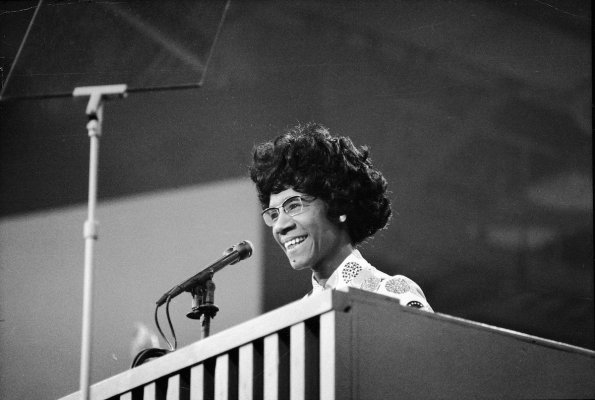 Here’s What People Once Said About How a Woman Would Never Be the Democratic Nominee
Next Up: Editor's Pick