Donald Trump weighed in on the shooting of Harambe the Gorilla on Tuesday, defending the Cincinnati Zoo’s choice to end the gorilla’s life after a three-year-old boy got into the animal’s enclosure Saturday.

“I think it’s a very tough call. It’s amazing because there were moments with the gorilla the way he held that child it was almost like a mother holding a baby. It looked so beautiful and calm. And then there were moments where it looked pretty dangerous,” the presumptive Republican presidential nominee said. “I don’t think they had a choice. I mean, probably they didn’t have a choice. You have a child, a young child who’s at stake, and it’s too bad there wasn’t another way.”

The rare, 420-lb. gorilla was shot by zoo officials after he dragged the boy around the enclosure. The boy escaped with serious but non-life-threatening injuries. The shooting sparked an uproar on social media, with some arguing that there was no need to shoot Harambe and others claiming it was a split-second decision that likely saved the young boy’s life. Zoo officials have said that tranquilizer darts take time to kick in, and using one could have scared the gorilla and made him injure the boy. 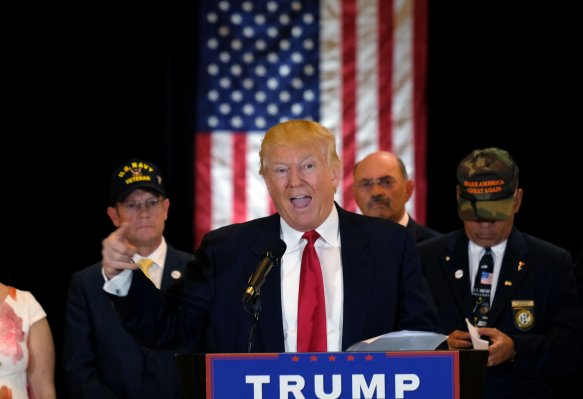 Trump and Clinton Tangle Over His Veterans Donations
Next Up: Editor's Pick