The Cincinnati Zoo Mom Is My Hero

Children pause at the feet of a gorilla statue where flowers and a sympathy card have been placed, outside the Gorilla World exhibit at the Cincinnati Zoo & Botanical Garden on May 29, 2016.
John Minchillo—AP
Ideas
By Darlena Cunha

After a gorilla at the Cincinnati Zoo was shot to death on Saturday for dragging a toddler who fell into the enclosure, many are blaming the child’s mother. Such criticism is misguided. We should be applauding her as a hero.

The story reminds me of a hot August day nearly four years ago. I was standing on the deck of our community pool where we were having a pool party for my 4-year-old daughters’ birthday. My child made no noise as she slipped into the water, following an errant party hat that had succumbed to the breeze. My hands were full of tape and balloons, and my back was toward the water for a few brief moments as I struggled to rip the sticky strip from its container.

There was a hand on my shoulder.

“Hey,” my friend said to me quietly, “can your daughters swim?”

Whirling around, I caught a glimpse of a few tiny fingers, flapping helplessly at the surface of the water. My daughter was completely submerged. She was too scared to flop around, or not scared enough. She had always been in floaties. She knew not to go into the pool. But she probably never thought about why.

I jumped in, grabbed her and pulled her to the surface with me. Both of us sopping wet and me in full clothes, her big brown eyes went immediately back to the party hat now on the bottom of the pool floor. She didn’t understand what happened, but it made an impression. To this day, she’ll proudly tell the story of the time she almost drowned, and I jumped into the pool with my shoes on.

Me on the other hand? This is the first time I’ve told the story. Still, all these years later, I’m traumatized and scared at that memory.

I can relate to the mother of the toddler at the Cincinnati Zoo. I imagine many other parents can, too.

That mom had taken her family to the zoo most likely because she loves them—not because she was hoping they’d get mauled by gorillas. She was being a good mom. In a video, you can hear her calmly telling her son: “Mommy’s right here, mommy loves you.”

My heart breaks for her. If that had been me, I don’t know that I could have kept it together. I would have been screaming, crying, jumping over the fence. I’d probably be making everything worse.

The father was also there, but no one at all is talking about him. In these situations, why does it seems that it is always the mother who is blamed, threatened and harassed?

In this case, a 400-pound gorilla who can crush a coconut in one hand and who does not understand that human beings are breakable was almost certainly going to hurt that child, accidentally or not. Yet some have decided the zoo director should resign and that the mother should be lambasted because an animal died.

I wish the gorilla could have lived. But every single person working at the Cincinnati Zoo did the right thing. They did what they are trained to do.

Americans thrive on empty knowledge we amass from movies and entertainment. The television that tells our children through Tarzan and George of the Jungle that gorillas are our friends to play with is the same television that tells social media activists that tranquilizers instantly put a 400-lb. mammal to sleep. Neither of those things are true. The zoo saved a child this weekend. That’s the story, right there. A gorilla had to die. It is a sad loss. But it remains a happy ending.

Life is precious; it is quick. I make my kids wear helmets on their tiny bikes when they ride around the driveway. I don’t let them climb trees. They’ve never had a black eye, a broken arm or a split-open head. But not because I’m always right there. Because I’ve been lucky. And my mistakes have been forgiven, which is more than can be said for this poor family. 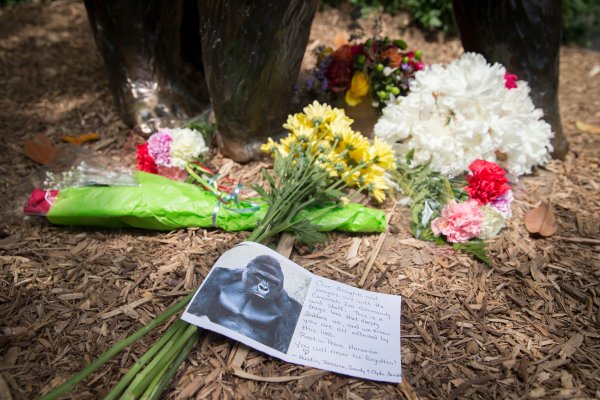 Stop Mommy-Shaming Over the Gorilla Incident
Next Up: Editor's Pick