This Book Will Help You Become the Ultimate Star Wars Fan

On first viewing, Star Wars is a story about good versus evil, a loner farmhand who takes up arms against an evil empire. Around the 24th viewing — and I speak from experience — you start to wonder about the moral ambiguities surrounding Luke’s decision to blow up the Death Star, presumably killing hundreds of thousands of soldiers and government contractors in the process.

Any text as rich in story yet rife with contradictions as is Star Wars can be read in myriad ways. One viewer might see a heroic rebellion rising up against a tyrannical government, another might see a son struggling to avoid becoming his father, yet another might question just why it is that, in this universe, blackness seems to represent evil. It is these themes that Cass R. Sunstein seeks to explore in his latest book, The World According to Star Wars, out May 31.

The work is something of a departure from the norm for Sunstein, among the country’s foremost legal scholars and a former official in the Obama White House. (Among his best-known books is Nudge, a New York Times bestseller exploring how behavioral economics can help people make better decisions, co-authored with Richard H. Thaler.) But Sunstein’s analytical prowess combines with what is clearly a deep love of Star Wars to produce a concise yet inclusive examination of the deeper meanings within the space fantasy saga.

Many of the subjects herein — the existence of free will, the influence of George Lucas’ politics on the series, the Jedi religion’s ties to Buddhism— will not be new to the most hardcore Star Wars fans. But that does not mean said fans should skip Sunstein’s book. Even if the topics here are well-tread ground, Sunstein takes battles long fought in college dorms and Reddit threads and elevates them to a higher level. Case in point is his analysis of the concentration of power in the Star Wars universe, in which he draws parallels to American politics:

The book is not all serious. Sunstein also offers a look at some of the more entertaining theories concerning the Star Wars universe, including a relatively new idea that Jar Jar Binks, a widely derided character from the prequels, is in fact a manipulative master of evil who acts foolish and inept to deflect suspicion. (It’s not true, but it’s fun to think about.) There is also the idea that Han Solo, famously skeptical of the Force, is himself capable of using it, as evidenced by his piloting and blaster skills.

All told, what Sunstein has accomplished is the ultimate primer for guiding a Star Wars padawan to the level of Jedi Knight. If you have a serious Star Wars fan in your life, this book will help you speak his or her language, whether that might be Galactic Basic, Bocce or Shyriiwook. 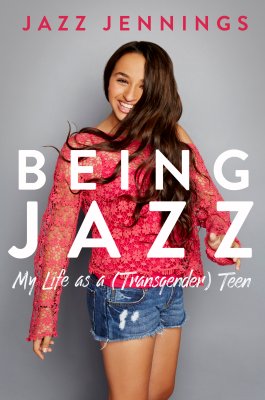 When I First Knew I Was Transgender
Next Up: Editor's Pick