Donald Trump Thanks Police for 'Handling the Thugs' After Protesters Arrested

Both of Donald Trump’s rallies in California on Friday were met by protesters, some of whom clashed with law enforcement and were arrested, prompting Trump to thank police for “handling the thugs.”

“Fantastic job on handling the thugs who tried to disrupt our very peaceful and well attended rally,” Trump tweeted to the San Diego Police Department on Friday night. “Greatly appreciated!”

Police attempted to disperse the crowd in San Diego, declaring the protest unlawful after shouting matches broke out and people threw trash at one another, the AP reported. At another point, tension rose as police officers wearing riot gear and wielding batons shoved protesters back to keep them from Trump supporters. Police also used pepper spray on several protesters, according to CNN.

But for the most part, the gathering merely involved shouting and chanting, the network reported. The signs and chants of both Trump’s supporters and opponents made reference to his controversial comments on immigration and his plan to build a wall along the Mexican border.

There were no reports of injuries or property damage at the San Diego protest, according to NBC. 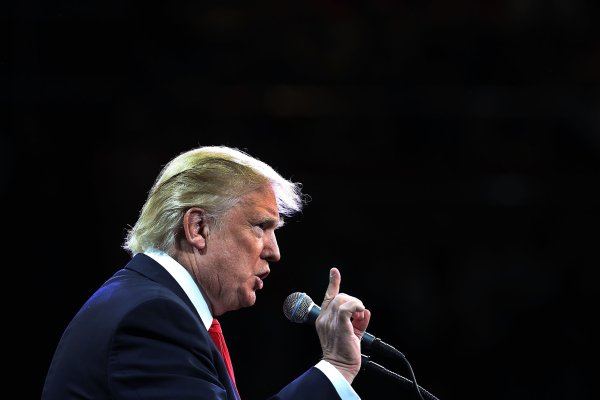