Memorial Day is all about remembering those in uniform who have died in service of the United States. But it’s also important to remember what they died for. And that is where, too often, those of us left behind have fallen short. The estimated 1 million who have died since 1776 have done their duty, bequeathing their survivors—and yes, we all are truly their survivors—a safer world.

Sure, sometimes it doesn’t seem that way. The U.S. has been engaged in a constant war since October 7, 2001, when bombers and cruise missiles began attacking Afghanistan to punish it for sheltering Osama bin Laden. Total U.S. deaths in the terror war are 6,888 (including 5,388, or 78%, on the battlefield). Its cost is likely to top $6 trillion before the U.S. spends the last dime on the final surviving veteran.

The scourge of terrorism, accelerated by the 24/7, always-on media world in which we live, can make it seem that the globe is aflame. But battlefield deaths—which is what we honor on Memorial Day—are down, around the world.

In the United States, some of that bequest is a function of geography and history. A pair of oceans makes for a wonderful moat. But it’s also a legacy of having the world’s best-trained troops. Yes, there are snafus aplenty in today’s U.S. military, but on the whole they do a pretty good job. When they fail—and there’s been a string of less-than-successful ventures lately: Afghanistan, Iraq, and Libya, for starters—it has been their political leaders (the rest of us, in other words), who have let them down.

We have let the White House and Congress get away with undeclared—and now, seemingly, perpetual—combat. “War has burst out of its old boundaries,” writes former Pentagon official (and Army wife) Rosa Brooks in her soon-to-be-published How Everything Became War and the Military Became Everything: Tales from the Pentagon. “Today, as the military struggles to respond to novel threats from novel quarters, its once seemingly straightforward raison d’être—defending from armed attack by foreign states—is no longer clear-cut.”

President Obama’s Memorial Day visit to Arlington National Cemetery will highlight the paradox. He will place the traditional wreath on the Tomb of the Unknowns, and praise those who have died in combat for the United States. “Most Americans don’t fully see, don’t fully understand the sacrifice made by the 1% who serve in this all-volunteer armed forces,” he said there last year. “Few know what it’s like to take a bullet for a buddy, or to live with the fact that he or she took one for you.”

But the commander-in-chief has steadfastly declined to say that Americans troops abroad right now—under his orders—are engaged in combat, and that the few who have died, have died in war. Congress is also to blame, preferring to let him fly solo without approving the specific military campaigns now underway in dark corners of the world.

Three Americans have died in the war on terror so far this year in Afghanistan and Iraq. Four others died of non-hostile causes, including a Humvee rollover, and the collapse of a building during a violent windstorm. Sure, their number is small—except to their own families, whose loved ones volunteered their last full measure of devotion, to the rest of us.

“The men and women of the armed forces are willing to fight—and die, if necessary—to defend the nation,” write retired Army lieutenant general Dave Barno and military scholar Nora Bensahel. “But asking them to do so without acknowledging that they are at war is simply wrong.”

This kind of war wasn’t an American choice. But that hardly makes it any less real for those fighting it, no matter how few. Memorial Day would be a fitting day to acknowledge the U.S. is at war, and likely will be, for many Memorial Days to come. 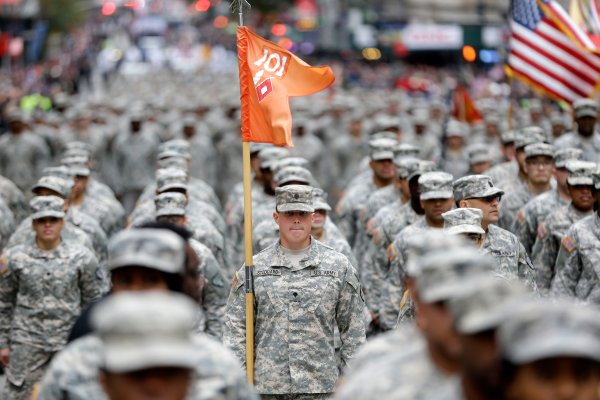 Military Spouses and Kids Bear the Burden of Service
Next Up: Editor's Pick