Jake Gyllenhaal is known for flexing his dramatic chops in movies like Nightcrawler and Brokeback Mountain, but the A-list actor found some time to squeeze in a comedic guest spot on Inside Amy Schumer, playing a fictionalized version of himself in a sketch that spoofs the popular MTV reality show Catfish.

The “Katfish” segment begins with Broad City’s Paul W. Downs (complete with a t-shirt that shrinks as the sketch goes on) playing a satirical caricature of Catfish host Nev Schulman, attempting to bring seemingly duped dater Amy face-to-face with the person she believes is impersonating Gyllenhaal as he courts her on the internet. “He just messaged me and said, ‘You are the most beautiful woman I have ever seen,’” Schumer says. Downs adds: “Yeah, that’s another red flag.”

Attempting to expose the supposed imposter, the crew heads to his address, where they’re greeted by an overweight man whom the comedienne assumes is the person behind the charade. He’s not. It turns out he’s just the doorman for the real Gyllenhaal, who greets the cameras in the foyer with his beloved ferret friend Falcor cradled in his arm.

Find out what happens when Schumer comes face-to-face with Gyllenhaal in the full sketch, below. Inside Amy Schumer airs Thursdays at 10 p.m. ET on Comedy Central. 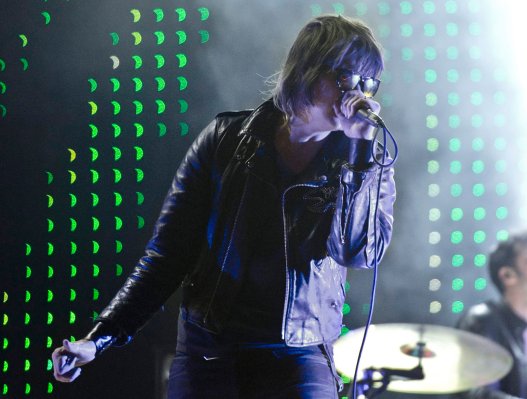 The Strokes Just Released Their First New Song in Years
Next Up: Editor's Pick