Donald Trump promised Thursday to scale back President Obama’s environmental regulations and called for faster development of U.S. energy resources in his most sweeping remarks on energy policy since entering the presidential race.

“The government should not pick winners and losers, instead it should remove obstacles to exploration,” the presumptive GOP nominee told attendees of an oil industry conference in North Dakota. The state has been the center of the nation’s fracking boom for nearly a decade. “Political activists with extreme agendas will no longer write the rules.”

The speech included a laundry list of commitments to radically change the trajectory of federal energy and environmental policy. Trump pledged to save the coal industry from decline at the hands of President Obama’s Clean Power Plan. He promised that his policies would allow the U.S. to be completely energy independent. He said he would “cancel” the Paris Agreement to address climate change that was adopted last year by more than 190 countries and stop funding of any international efforts to address global warming. A Trump administration would end “totalitarian taxes” he says have been levied by the U.S. Environmental Protection Agency (EPA).

But Trump offered few details to behind any of his proposals, some of which defy common understandings of the workings of the energy industry. His promise to save coal, for instance, runs counter to market forces that have made the energy source increasingly unfeasible. Coal has become more expensive as an energy source in comparison to natural gas. Without the giant subsidies Trump says he loathes, a clear path to propping up the coal industry remains unclear. And, in a world absent of regulation, Trump also promised to address “real environmental challenges” like providing clean air and clean water while not dealing with “phony” issues.

“The market forces are going to be what they are,” Trump said at a press conference before the event when asked about coal. “To me a market force is a beautiful force.”

Trump devoted little time to discussing the science of change climate directly, but his positions suggest that he gives little credence to the overwhelming majority of climate scientists who agree that top emitters must act urgently to address global warming. President Obama has made the issue a priority despite widespread denial of climate science from the American right. The end of U.S. regulation addressing climate change would yield the Paris Agreement essentially worthless and significantly undermine global climate action. The prospect of a Trump presidency has already unsettled foreign leaders who have prioritized addressing climate change.

“If a climate change denier was to be elected, it would threaten dramatically global action against climate disruption,” said French foreign minister Laurent Fabius, who led the Paris climate conference in December, earlier this month. “We must not think that everything is settled.”

Trump’s speech should offer some assurances to oil and gas industry that he would support their interests as president. Oil executives have been skeptical of Trump’s candidacy since he emerged at the GOP frontrunner. The candidates’s support for ethanol as an alternative to oil and his dismissal of the industry as a “special interest” drew derision from many energy leaders.

The new positions on energy follow conversations with Harold Hamm, an oil and gas billionaire who also served as energy advisor to Mitt Romney in 2012, and North Dakota GOP Congressman Kevin Cramer. Both praised Trump in speeches at Thursday’s event.

Trump, known for his off-the-cuff style, used a teleprompter throughout his energy speech, though at moments seemed to go off script when taunting Democratic rival Hillary Clinton and President Obama. 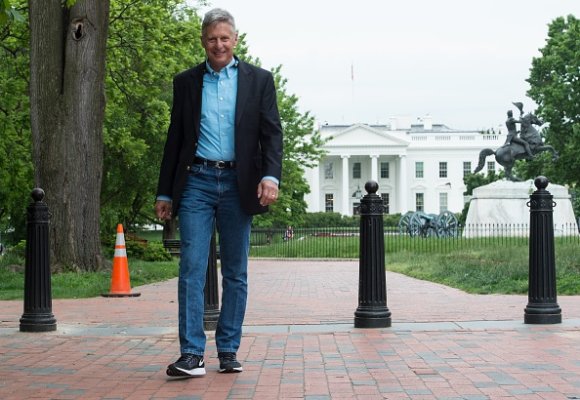