Preacher and Outcast Lift Faith and Fear from Comics

In a dusty, run-down church in tiny annville, Texas, a man of the cloth named Jesse Custer tells his flock the world is falling apart: “And you know what? It’s all your fault. You’ve turned your back on the Lord. Your despair has caused you to lose faith, embrace false idols. But these idols, these things, they won’t save you.” The parishioners look scared, and they should. Their salvation depends on Jesse, and he’s possessed.

Preacher, the new AMC drama produced by frequent collaborators Seth Rogen and Adam Goldberg, is a comic-book series to its core. It’s not just adapted from a comic; it also shares the genre’s sense of infinite possibility and its comfort with merging big ideas and pulp sensibility. Played by Dominic Cooper, Jesse suffers a crisis of faith and finds himself taken over by a force from outer space, or what some might call the heavens. Is it good or evil? The power it bestows–to control others with his voice–can go either way. Sometimes he brings a wicked man to Jesus, but sometimes a command to “open your heart” compels a poor fellow to crack his own sternum.

This entity is so powerful that it destroyed previous hosts, including Tom Cruise, who in this reality exploded at a Scientology conference. Now Jesse–allied with his short-fused ex (Ruth Negga) and an Irish vampire (Joseph Gilgun)–strides through a world that feels postapocalyptic. The harsh light makes everything and everyone appear brittle; it leaches out possibility. There hasn’t been a cataclysm in fictional Annville, but misery has, little by little, come to govern the place. Developers led by the blandly wicked Odin Quincannon (Jackie Earle Haley) demolish homes the moment their occupants sign them away; an unfortunate young man shoots off his own lips, then goes through life mocked for his face’s resemblance to another part of the anatomy.

It’s a setting that needs a hero, and it’s thrilling to watch Jesse go from dour to empowered. Preacher’s sprightly way of making Annville’s ills seem solvable represents an unusual approach to evil, one that’s not shared by another new and similarly religious drama, Cinemax’s Outcast, whose hero, Kyle Barnes (Patrick Fugit), has long been tormented by demons who possess his loved ones–including, in flashbacks, his mother. His attempts to live in seclusion, with the shades drawn and the utilities shut off, are foiled as he’s drawn into aiding in exorcisms.

Fugit, the actor who gave a terrific and watchful performance as a cop in Gone Girl, is just as good in a show with a miserabilist tone that makes Batman v. Superman look like Pee-wee’s Big Adventure. Outcast begins with a child, inhabited by evil, bashing his head into a wall and eating his own hand; later, a woman is violently assaulted in her home by a possessed man. (You’re reminded, often, that Cinemax, owned by HBO, is where the channel puts stuff even more explicit than Game of Thrones.) When this show’s Reverend Anderson (Philip Glenister) orates, he’s even more absolutist about existential threats than Preacher’s preacher. “Church is not optional,” he declares. “This is the only thing that will fortify us, sustain us, inoculate us against the darkness.”

Yet church doesn’t help, at least not at first. In both Outcast and Preacher, religion is meant to be endured when not ignored. When Jesse visits a young woman in a coma, her mother dismisses him brusquely and promises to feed the casserole he’s brought to her dogs. Kyle, gifted with peculiarities that can help fight darkness, resists the call. In both shows, religion’s power runs up against a world not easily fixed, populated by the fearful and disillusioned whose hearts it can’t melt.

The fight between faith and the fallen is rare subject matter for TV dramas of late. The one that engages most directly with the topic is Game of Thrones, whose characters are emboldened (or oppressed) by doctrines that don’t exist in our world. Earthbound dramas avoid the subject altogether, which makes sense; TV has grown increasingly nihilistic since The Sopranos. With the exception of Big Love, churchgoing has been something of a nonstarter for protagonists written, self-consciously, as “complicated.” This seems like a huge oversight, since religion, the guiding principle in billions of lives, lends itself to drama.

Neither Preacher nor Outcast touts faith as the sole answer to the world’s ills; both depict how frustrating and tiring it is to be on either side of the pulpit. Their heroes take what works from their creed and invent the rest. While Outcast tells of an exorcist learning to harness his powers, Preacher does something far more intriguing, providing Jesse with a skill set that teeters between divine and demonic. He might be a messiah or in need of exorcism himself; the show might land in blasphemy. It’s a precarious tone that perfectly fits the subject matter. Preacher has a multitude of mysteries to reveal–as long as you have faith. 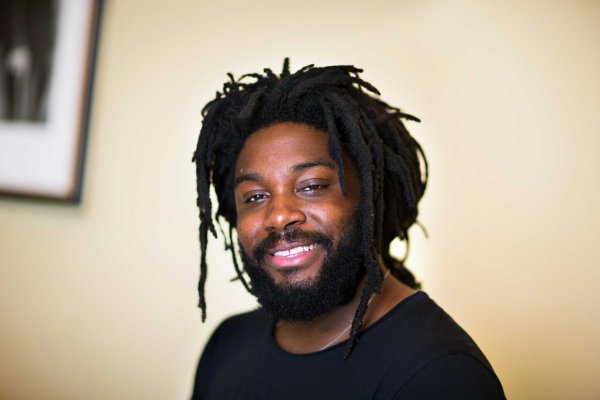 Boys Do Cry, and That's O.K.
Next Up: Editor's Pick