In the world of middle-school literature, the how-I-spent-my-summer novel is a genre, and the how-I-spent-my-summer-with-my-grandparents novel its subgenre–Richard Peck’s A Long Way From Chicago and Sharon Creech’s Walk Two Moons are classics. Now Jason Reynolds joins that group with As Brave as You, a touching story of Brooklyn brothers who spend an iPhone-free month in rural Virginia, picking sweet peas, scooping dog poop and learning what it means to be courageous.

Genie, 11, and Ernie, 13, have been dispatched to Grandpop and Grandma’s while their parents work out whether they’re getting divorced–a troubling enough start to the summer for worry-prone Genie. But when he arrives and finds out his kooky yet affable Grandpop is blind (and sometimes carries a revolver), his anxiety skyrockets, keeping him up at night. Both boys eventually settle into their country routine, until Ernie’s birthday. Tradition in the predominantly black neighborhood dictates that Grandpop teach all boys how to shoot on the day they turn 14, a project he started after the death of Emmett Till. “Grandpop said that back then it was self-defense,” Reynolds writes, “but now it was just all in good fun.” But it doesn’t sound like fun to Ernie. In fact, he’s scared. When the lesson leads to an accident, every generation of the family must confront complicated feelings about manhood.

Reynolds, who has won Coretta Scott King Honor awards for All American Boys and The Boy in the Black Suit, has a gift for flashy but natural dialogue that pulls the reader into this vivid world of burgeoning masculinity. Genie and Ernie are all boy, but they’re sensitive too, and that’s not a contradiction. With subtlety and warmth, Reynolds offers up a new definition of bravery, one that honors the struggles of the past but looks toward a gentler future. 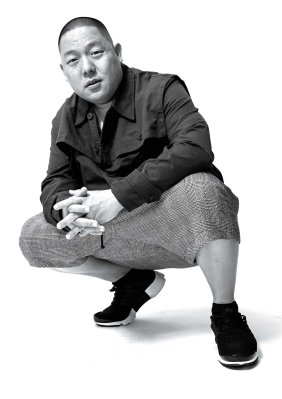 8 Questions with Eddie Huang
Next Up: Editor's Pick