Eddie Huang the Fresh Off the Boat author, Baohaus chef and Viceland TV host is back with a new book, Double Cup Love, about his international quest for romance
Michael Bucher for TIME
By Daniel D'Addario

As someone who has prepared actual Chinese food, what do you make of American Chinese food?

Any country you travel to has their own Chinese food, and they all have the same things. They hit on a matrix. Every single dish–whether it’s kung pao chicken, General Tso’s chicken, orange chicken–you have acid from vinegar, heat from chilies, sugar, soy, which has umami, and then it’s usually fried. It’s pop music. Max Martin [hitmaker for Katy Perry, Taylor Swift, the Weeknd and others] is to music what Chinese food is to fast food.

You say the Michelin guide pushes restaurants away from taking risks.

They like to say they are a response to the stale American food culture. But they create another stale global food culture at the other end of the economic spectrum. They are creating a formula at the top of the food chain just like Chinese food created it at the bottom. Neither is evil or insidious, but they need to be considered.

I have chefs I’m friends with, but it shouldn’t gloss over how you view their food. There is a formula to these restaurants. I think it’s very important for chefs to maintain their identities, resist the pressure to conform, and be idiosyncratic. If you’re a leader, be a leader! Don’t be a follower.

Is it strange to have your name on a character of ABC’s Fresh Off the Boat, a TV show based on your book that you’re no longer involved with?

I think it’s cute. In certain neighborhoods, they’ll come up to me and say, “I love your show!” They’re the ones who are going to watch the show and go on Amazon and buy the book and say, “The book’s really not like the show! He’s not the 12-year-old kid from the show!” I’m actually 34. Surprise! I was mad in the beginning because I felt like we were misrepresenting Asian Americans, but the fact that so many Asian Americans have related to that image, it just confirms I’m more of an outsider than I thought I was, and that’s fine with me.

Is collaboration difficult for someone accustomed to being the boss?

Much of Double Cup Love is about the challenges in your now concluded relationship with a white woman. Do these challenges make you less likely to date people of other ethnicities?

It’s not easy. But you don’t always have a choice of who you like. It’s important for white people, people of dominant culture, to know: You may be insecure, and you may be aware you don’t know much about my culture. But it’s O.K. Don’t feel guilty, don’t put pressure on yourself, and don’t treat the next person of color you meet as your spirit guide. You’re your own guide. If you seek out new experiences, you’ll understand it soon enough.

Breakups tend to have two sides. Did you feel trepidation about writing about your ex?

You also write about using OkCupid. Is it nerve-racking to use a dating site as a recognizable public figure?

When I started, it was nerve-racking. There’s definitely people who hit you up because of the person you’ve projected, not the person you are. 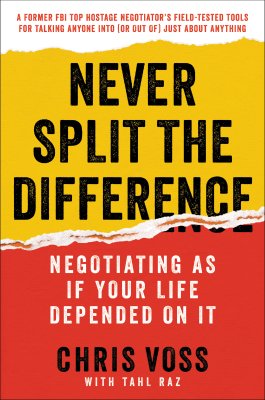 5 Tactics to Win a Negotiation, According to an FBI Agent
Next Up: Editor's Pick