Virginia Gov. Terry McAuliffe invited the Chinese businessman whose donations to him have been named as a focus of Justice Department investigators to a 2013 fundraiser at Hillary Clinton’s personal Washington, D.C., residence.

Wang Wenliang, a Chinese national with U.S. permanent residency, briefly shook Clinton’s hand at the Sept. 30 event, a representative for Wang told TIME. An American company controlled by Wang made a $60,000 contribution to McAuliffe’s campaign three weeks before the fundraiser. Less than a month later, a separate Wang company pledged $500,000 to the Clinton Foundation, the first of several donations that eventually totaled $2 million.

The fundraiser was one of at least three interactions between Wang and McAuliffe, according to the businessman’s representative. McAuliffe initially told reporters this week he could not remember ever meeting Wang, though he later clarified that his staff had informed him of several likely meetings. “I did no deals,” McAuliffe said Wednesday in a radio interview. “I would not know the man if he sat in the chair next to me.”

The relationship between McAuliffe and Wang has been under scrutiny since CNN reported that the FBI and Justice Department’s public integrity division were investigating McAuliffe. Among the donations that were of interest to investigators, according to CNN, were a total of $120,000 in contributions to McAuliffe from a company controlled by Wang. Foreigners with permanent residency in the U.S. are allowed to make donations to campaigns under U.S. election laws, and corporations are allowed to make direct donations in Virginia.

James W. Cooper, an attorney at Arnold and Porter who has been hired by McAuliffe, told reporters Wednesday that Justice Department officials had told him the focus of investigation was not the Wang donations, but questions over foreign sources of personal income and whether the governor lobbied on behalf of foreign interests without registering as a foreign agent. Cooper said that the Justice Department told him there had been no findings of wrongdoing by the governor.

A wealthy industrialist and port owner from a northern province of China, Wang has multiple business interests in the United States, including a construction firm that has done work on Chinese embassies and a soybean export business. His firm had previously signed a memorandum of understanding with McAuliffe’s predecessor, Gov. Bob McDonnell, to facilitate the export of American soybeans from Virginia ports to China.

According to Wang’s representative, a second meeting between McAuliffe and Wang took place in the state capital of Richmond after McAuliffe’s election to discuss an expansion of a soybean export agreement between Wang and the state. The third meeting took place before McAuliffe became governor, at a dinner in Washington organized by former South Carolina Gov. Jim Hodges, who has registered as a federal lobbyist for one of Wang’s companies.

The Wang representative said that all of his political and philanthropic donations in the U.S. were done at the recommendation of Mark Fung, his legal counsel. In 2012, Fung appeared with Hodges in a video news report for Chinese television from the Democratic National Convention in Charlotte, N.C., discussing the strategies for winning political influence in the United States. “If you really want to influence, let’s say, U.S.-China policy it is almost worth it to have emphasis and influence on the state level,” he said in the report.

Wang’s representative also said that Wang met twice with former President Bill Clinton to discuss the Clinton foundation, once in the United States and once when Clinton was visiting China.

The Clinton campaign did not respond to requests for comment. A spokesman for McAuliffe confirmed both the fundraising meeting and a subsequent meeting in Richmond to discuss soybean exports. 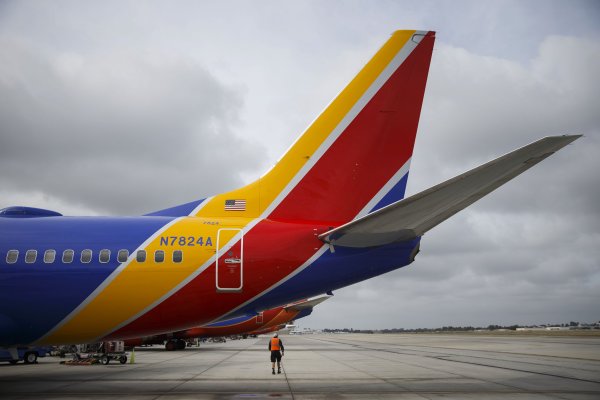 Man Pleads Guilty After Pulling Woman's Hijab Off on Plane
Next Up: Editor's Pick