Donald Trump may have sewn up the GOP nomination three weeks ago, but he’s not done with his rivals and critics.

Trump has made recitation of his unlikely primary victories a staple of his campaign rallies across the country, but facing lingering opposition from Republican elites to his candidacy, Trump is making a point of airing his grievances. Taking aim at Mitt Romney, South Carolina Gov. Nikki Haley, and Jeb Bush, Trump lashed out at those who have yet to endorse him.

Mocking Romney as someone who “walks like a penguin,” Trump claimed he has “a store that’s worth more money than he is,” apparently referencing a Gucci store that is a tenant in his flagship Trump Tower. He touted his victory in South Carolina despite Haley’s endorsement of rival Sen. Marco Rubio. And he once again taunted “low-energy” Bush.

He even had harsh words for Texas Gov. Rick Perry, a vocal Trump critic who endorsed him earlier this month.

“He said the worst things about me,” Trump said of Perry. “This politics is a dirty business, I have to tell you. And I’ve never seen people able to pivot like politicians.”

Speaking to thousands of supporters at a rally in Anaheim, Trump justified his attacks by claiming them as a reason for his electoral success.

“If I was nice to everybody, I wouldn’t be here today,” he said. “I’d be watching television right now.”

Also in Trump’s reticle was Weekly Standard editor William Kristol, a leader of the GOP’s #NeverTrump movement who has been a vocal critic on television. “All the guy wants to do is go to war and kill people,” Trump blasted, noting his support for the invasion of Iraq—a position Trump also shared at points. Kristol is now among those Republicans searching for a third-party alternative to Trump.

“He’s been doing it for like nine months and he can’t find anybody—what a loser,” Trump said, before predicting the demise of Kristol’s conservative magazine.

Trump was complementary of South Carolina Sen. Lindsey Graham, who is still vocal about his policy disagreements with Trump.

“It was very nice that Lindsey Graham called,” Trump said. “Don’t forget, I wasn’t an angel—I gave out his phone number,” he continued, reminiscing about giving it out on live television at a rally to respond to Graham’s verbal barbs.

“I appreciate that many of the people I competed against have now endorsed me,” Trump added.

But when a member of the audience shouted out that Bush hadn’t endorsed him, Trump pounced on his former rival.

“No, Jeb hasn’t done it yet,” he acknowledged as the crowd booed. “He will get a burst of energy and he will do it, believe me. He needs a little more energy.”

Trump added that he had seen Bush’s negative comments about his candidacy during a recent trip to Europe. “He didn’t think that in Europe I’d get the word back but he was talking there on television about me,” Trump said, summarizing a core principle of his campaign. “They talk badly, I talk badly, that’s how it works.” 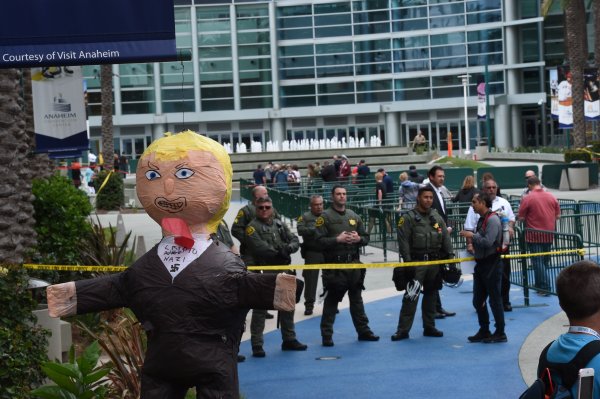 Police Warn Protesters Against Violence at Donald Trump Rally in California
Next Up: Editor's Pick