Can Libertarian Gary Johnson Be a Factor in 2016?

Donald Trump is almost certain to be the most unpopular presidential nominee of a major party in modern times. Hillary Clinton is running a close second. And voters’ historic distaste for Clinton and Trump has sparked a debate about whether a third-party candidate can play spoiler in November, or even pull off a colossal upset.

You would be right to be skeptical. The third-party scenario is a classic quadrennial pipe dream. But this year, the question merits consideration.

The only third party with a chance to be a factor are the Libertarians. That’s partly because they’re the only ones whose candidate is likely to make the ballot in all 50 states. But it’s also because they may sport a ticket with two former two-term Republican governors: Gary Johnson of New Mexico and William Weld of Massachusetts. In three recent national surveys, Johnson has cracked double-digits in a hypothetical match-up against Trump and Clinton.

The combination of polling and pedigree has party officials insisting that the long-promised libertarian moment could really be upon us. “The frontrunners of both parties are absolutely hated by giant segments of the electorate,” says Nicholas Sarwark, the chair of the Libertarian National Committee. “We are a serious alternative.”

The first step is for Johnson and Weld to win the presidential and vice-presidential nominations at the party’s national convention, which begins Friday in Orlando. They head into the weekend as the clear favorites. (Johnson, like Weld a former Republican, was the Libertarian presidential nominee in 2012.) And the cast of challengers is not an imposing bunch.

Of the 18 candidates, only a few are believed to have a legitimate chance to upset Johnson. There’s Austin Petersen, a veteran activist from Missouri who sometimes refers to himself as “the Freedom Ninja.” There’s Darryl Perry of New Hampshire, who has refused to file papers with the Federal Election Commission as a form of protest against an institution he says lacks constitutional legitimacy.

Then there’s the wild card: John McAfee, a highly eccentric former software tycoon who fled his adopted home in Belize in 2012 when government authorities sought him for questioning in connection with a murder. “I don’t want to be unkind to the gentleman,” Belize’s prime minister said, “but I believe he is extremely paranoid, even bonkers.” And McAfee’s most recent ad doesn’t suggest otherwise.

Read More: The Myth of the Libertarian Spoiler Candidate

In order to win the nomination, a candidate needs a simply majority of voting delegates. Johnson, 63, cleared this benchmark in a recent internal poll. But these being Libertarians, strange things can happen. The vote takes place Sunday, on the heels of a Saturday night debate between candidates who can be virtual unknowns even to party officials. In 2004, an obscure computer consultant named Michael Badnarik—”nobody had ever heard of him,” Sarwark says—surprised Libertarian officials by winning the party’s presidential nomination after debate hostilities between the two favorites soured voters.

Should Johnson and Weld win, could a ticket of two former governors make some noise against Clinton and Trump? “I think things could get really interesting, and that there is the possibility of actually winning the presidency,” Johnson says. “Most people in this country are libertarian; it’s just that they don’t know it. Fiscally conservative, socially liberal—I think most people fall in that category.”

The former CEO of a marijuana products company, Johnson wants to eliminate personal and corporate taxes, scale back government spending and U.S. entanglements overseas, and create a path to citizenship for undocumented immigrants. But to many his primary selling point may be that he is neither Trump nor Clinton. “There are dumpster fires in my town more popular than these two,” scoffed Republican Senator Ben Sasse of Nebraska, a conservative who rebuffed overtures to run as a third-party candidate.

But Johnson is not an especially adept politician himself. In 2012, he ran a disastrous campaign for the Republican presidential nomination. His performance on the Libertarian ticket was little better. He won more than a million votes, the highest number in Libertarian history—but just 1% overall.

Then as now, Johnson squandered much of his scarce media coverage complaining about being omitted from polls. His entire strategy in 2016 hinges on winning the media attention that prompts inclusion in surveys, then doing well enough in surveys to get more attention. “We’re spot on in terms of message,” he says, “but it’s a message that’s not being heard.” His magic number is 15%: the threshold at which a candidate automatically wins a spot on the presidential debate stage.

It’s certainly an uphill battle. But in 2016, voters are angry enough to do unthinkable things.

“If I had asked you six months ago if a reality TV star with terrible hair and utterly horrible ideas could be the [Republican] nominee, you would have laughed at me,” says Sarwark. “But you were wrong. And I was wrong. This is a political climate where literally anything can happen.” 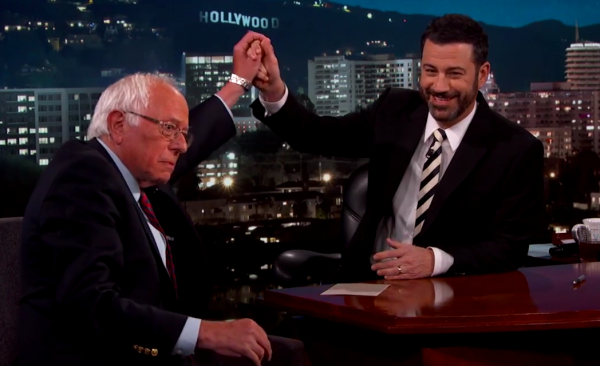 Sanders Says He's in Favor Of Debating Trump
Next Up: Editor's Pick