Donald Trump Fires Back at Critics and Protesters in Chaotic Rally

Presumptive Republican nominee Donald Trump railed at critics and a mass of protesters at an unruly rally Tuesday evening.

Before a rowdy crowd of thousands of supporters, and more than 100 protesters who repeatedly disrupted his speech, Trump found himself on the defensive over his personal and political career. Delivering a litany of rebuttals to press inquiries and attacks from Democratic rival Hillary Clinton’s campaign, Trump was defiant.

Responding to a new web video criticizing comments he made appearing to celebrate the collapse of the housing market leading up to the Great Recession, Trump explained he was in the private sector.

“I feel badly for everybody, what am I going to do,” Trump said. “I’m in business.” Later he said his business success during that turbulent period should serve as a credential. “That’s the kind of thing we need in this country,” he said.

Clinton’s campaign is hoping Trump’s comments will undercut his populist appeal. “I sort of hope that happens because then, people like me would go in and buy,” Trump said of the prospects for a housing crash in an audiobook produced for Trump University first unearthed by CNN.

Criticizing the media for highlighting how he failed to live up to his promise earlier this year to deliver $6 million to veterans’ charities until just Monday, Trump claimed the delay was a result of needing to do due-diligence on the groups.

“We have to vet some of these groups, you know, we have to vet the vets,” he said, as he offered no less than his campaign’s fourth excuse for the delayed payments, which until last week had claimed to have been paid in full.

“The system is against me, and it has been from the beginning, but I love it because there’s nothing better than beating the system,” Trump said of the press.

Trump also had harsh words for New Mexico Governor Susana Martinez, a Republican and the first Hispanic woman elected governor in the nation, who has been a fierce critic of his comments about those in the U.S. illegally. Saying Martinez was responsible for a slow recovery and an increase in food-stamp use in the state, Trump also blasted New Mexico’s spending on providing services, including public education, to those living illegally in the country.

“Syrian refugees are being relocated in large numbers to New Mexico,” Trump added. “If I was governor, that wouldn’t be happening,” he continued, before suggesting he might run for governor of the state.

Trump addressed his troublesome poll numbers with women, saying he believes he’s doing well with the majority of the voting populace even though surveys show otherwise.

“I think I’m doing really well with women, but what do I know,” he said, noting he’s benefiting from record poll numbers with men in some surveys. “I want to set [the] record with women, not with men,” he added. “The hell with the men.”

Calling Clinton a “low-life” and “lightweight,” he added that he “can’t listen” to Clinton’s attacks against him, because “she screams and drives me crazy.”

As private security guards and police officers escorted dozens of protesters from the cavernous convention hall, Trump taunted those chanting against him.

“How old is this kid,” he said of one protester. “He’s still wearing diapers.” He said of another: “He can’t get a date so he’s doing this instead.”

Several of those interrupting Trump’s speech were dragged from the venue by security after fighting removal attempts. “The safest place to be in America is at a Trump rally,” Trump exclaimed.

Outside the venue, hundreds of chanting protesters demonstrated against Trump holding signs and burning campaign paraphernalia. At one point they toppled a security fence and neared a clash with heavily armored riot police, but were held back by protest organizers. A glass window at the convention center was shattered by what officers believed to be a pellet gun, after first warning of a possible gunshot.

Before the rally, Trump appeared at the first fundraiser for Trump Victory, a joint fundraising account he formed with the Republican National Committee last week. The $10,000-per-person event comes as Trump says he hopes to raise $1 billion for his campaign, after reversing his opposition to accepting donations for the general election. 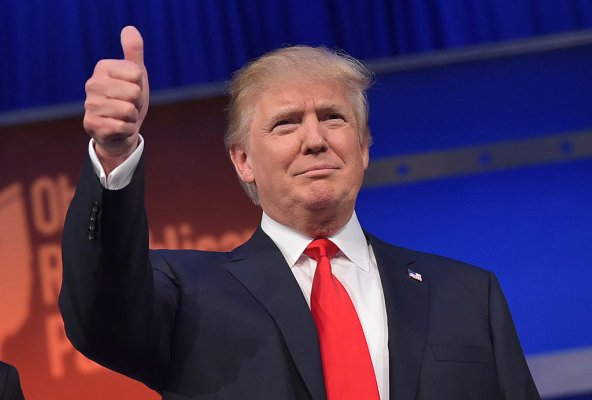