Hyeonseo Lee on July 13, 2015. Lee fled North Korea, and has written a book about her escape, and her return to North Korea to help her parents escape
Keith Beaty—Toronto Star/Getty Images
By Charlie Campbell / Seoul

Aged just 17, Hyeonseo Lee crossed the Yalu River from North Korea into China on a whim. After living secretly in China for 10 years, she finally made the journey to South Korea, but then returned in a daring bid to smuggle her family out of her impoverished homeland. She wrote her life story in The Girl With Seven Names, which has been quoted at the U.N. Security Council, and in 2013 she gave a much fêted TEDTalk about her experiences.

Now living in Seoul, Lee is in the process of setting up an NGO to advocate for female North Korean defectors and refugees who are vulnerable to physical and sexual abuse.

The [South Korean] National Intelligence Service did their best to persuade me not to go; they said that they couldn’t guarantee my safety. It took me six months to make a decision.

I have given a lot of speeches all around the world but I thought China is the place I really have to go. I just went there and hoped that I was safe. I ended up hiding in the Beijing Airport bathroom [at one point] as I didn’t think I could come back or see my family again.

You lived in China secretly for 10 years. Did anyone know your real identity?
[When I was living by the border,] a Chinese person reported me to the police station, because every month there’s a [sweep] for North Korean defectors. My friend was repatriated in the middle of the night because of this. Somebody reported me but I was lucky as my Chinese was really good at the time and they couldn’t believe I was a defector.

Soon after that I moved to Shanghai as I wanted to stay far away from the North Korean defector community [by the border]. I bought a Chinese ID card and completely transformed myself into real a Chinese person. I couldn’t trust anyone as maybe they would turn out to be an enemy and report me.

The shocking thing is there was a girl who was my roommate for many years, and then in 2013 when I did my TEDTalk, she called me from Shanghai. She said, “I didn’t know you’re a North Korean defector,” and I was really embarrassed. But she said, “I understand that you had to do it.” I still felt very bad to have tricked my friend, but that’s the survival game.

How serious is the brainwashing in North Korea?
When Kim Il Sung died in 1994, I was shocked — I never expected him to die. Because we truly believed he was a god, who didn’t smoke, drink alcohol or go to the bathroom, or [have sex] with women.

Some people criticize North Koreans and ask, Are they stupid? How can they believe those ridiculous things? But I say, It doesn’t matter if you’re smart, if you were born in North Korea you would be exactly like us. We don’t know what freedom is. We have never enjoyed it. We don’t know what democracy is or capitalism. We are completely blocked. Not only from the outside world, but also domestically as it’s not easy to travel around inside North Korea unless you have a travel certificate from the regime. You only have one TV channel — it’s a propaganda channel. We believed that’s utopia because we cannot compare.

Then why do so many North Koreans — currently estimated at 100,000–300,000 — flee into China?
Most of those who go to China are from the border region like me, because they see the people in China live a better life than us. I was very naive. The moment I escaped to China, I didn’t have any money, I only had one address in my hand, of some long-distance Chinese relatives. I didn’t know China was that big. I thought I can find their home very easily and I would come back one week later. But then I found out the address was a 10-hour drive away.

What does freedom mean to you?
To me, realizing freedom, democracy is really difficult. I’m still learning every day, every minute. But when I was in China I realized this was freedom: watching Chinese TV without hiding the set and turning the volume right down. I could listen to South Korean songs very loudly [which are banned in North Korea]. And I could buy a bus ticket or train ticket on site and just go.

And the amount of ice cream! I was shocked. In North Korea we only have one type and it tastes like water. To me, sitting here drinking coffee with a blue sky is really freedom. It makes me feel really happy. I feel all these little things are really precious.

Do you miss North Korea?
North Korea is not the dictator’s country; it’s 25 million citizens’ country, and they are suffering under the dictator. North Koreans are really nice, kind, pure people. I hate the dictator and the regime, but I love my home country. I know that I can’t go back there. Even though the country is very dark — it’s like a disaster — it’s my home. Every night I go back there in my dreams.

In March, the U.N. increased sanctions on North Korea. Was this the right move?
I strongly agree with the sanctions. The U.N. and State Department now have the strongest sanctions ever, and I say it should have been earlier, and I told that to [U.S. Ambassador to the U.N.] Samantha Power in New York.

People worry that the sanctions will hurt North Korean citizens but won’t hurt the high-ranking people. But that is absolutely not true. The regime provides nothing to ordinary citizens. Nothing. They don’t rely on the regime for any public distribution system. People rely on themselves with the market system. So the sanctions affect the regime and those earning foreign currency for the regime.

Read More: The Detention of a U.S. Student in North Korea Underscores the Risks of Traveling There

But some people argue its better to engage the regime and have dialogue?
People who [advocate] engagement don’t understand the regime or the Kim family — they are evil and they are smart. That’s the reason they don’t open their economy. If you engage with them you will just make them stronger and the regime will last longer.

Why are you starting your NGO now?
It’s called North Korean Women and it’s for female North Koreans living inside North Korea, in China, in South Korea and the world. Life as a North Korean defector is really painful. Women are sold as sex slaves to human traffickers or Chinese men. They are being tortured, are suffering, with no payment, but the sad thing is that even a 20- or 30-year-old North Korean woman being a sex slave or being sold as human merchandise to an old Chinese farmer prefers that situation to being repatriated to North Korea. It’s another hell to live in North Korea.

Why do so many North Korean defectors struggle to adjust to life in South Korea?
It’s really sad. Defectors have a lot of issues at the moment, committing suicide, and even going back [to the North]. It’s hard to compete with our South Korean counterparts, because here, the people are highly educated, and grow up with democracy their whole lives. But defectors come from a completely different system — it’s like hell to heaven.

But also [South Korean] society has prejudice. Our perspective is that we were divided for seven decades so we are brothers and sisters. But in reality, when we arrived here we are completely forgotten people from the South Korean perspective, and we are a burden for them.

Are things improving?
I arrived in [South Korea] in 2008 and was received like an alien. But things are getting better. Me and other defectors are willing to tell our stories without hiding our faces. Before they considered us along with the dictators, like we are all ridiculous human beings, but right now some South Koreans are crying with us because they realize we came here not for a vacation but we left behind everything and suffered enormously, and they have sympathy. There are some people helping North Korean students in South Korea in terms of scholarships and funding. So there’s positive change also.

Read More: A Border With a View: Watching North Korea From the Outside

I gave a speech last week in New Zealand, and there was a South Korean exchange student in the audience. She came to me afterwards and said, “Can I hug you? I didn’t know. Even though I was living in South Korea my whole life I had never heard this real story of North Korean people.”

I thought that South Koreans basically knew what is going on but now I think they don’t know. People need to understand that we are the same people and need to raise awareness of unification.

Will the Korean peninsula ever be reunited?
I’m sad that [many South Koreans] don’t want unification, they want to be completely separate. The older generation feel connected somehow to North Korea so they want unification. After they die the new generation doesn’t even know when the Korean War happened. For them it’s completely [ancient] history.

If we don’t have unification within 20 years, it will be like we became completely two different countries. That’s why I’m scared right now. But who knows? Unification always seems a long distance away but maybe it’s quite close.

This interview has been edited for clarity and length. 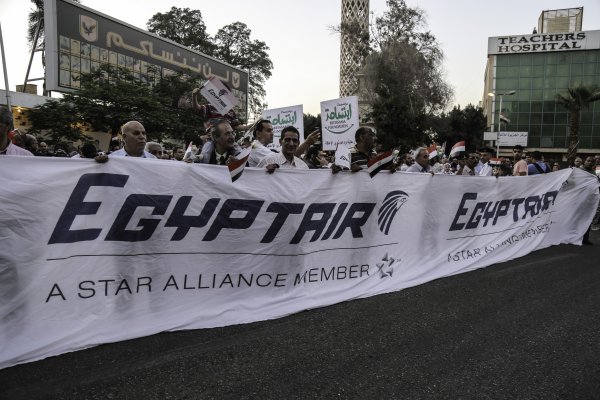 Signal From EgyptAir Flight 804 Detected
Next Up: Editor's Pick