Members from the pro-democracy Civic Party carry a portrait of Gui Minhai (L) and Lee Bo during a protest outside the Chinese Liaison Office in Hong Kong, Jan. 19, 2016.
Bobby Yip—Reuters
By Rishi Iyengar

The daughter of Hong Kong bookseller Gui Minhai, detained in China since November, has asked the U.S. to exert additional pressure on the Chinese government to secure his release.

During a congressional hearing in Washington D.C. Tuesday, Angela Gui said her father — a naturalized Swedish citizen — had not been allowed legal representation during his eight-month detention, Reuters reports.

“The U.S., Sweden, and other countries … need to work to make sure that Chinese authorities are not allowed to carry out illegal operations on foreign soil,” she said.

Gui, co-owner of Hong Kong-based publishing company Mighty Current Media, disappeared while in Thailand in October, later appearing in police custody in Mainland China. The publishing house is known for provocative books on the personal lives of Chinese government officials.

Four other employees of the company also disappeared late last year, and are suspected to have been illegally abducted by Chinese authorities in what would be a stark violation of the “one country, two systems” principle that allows the territory of Hong Kong special autonomy and democratic rights not enjoyed in Mainland China. At least two of booksellers have since been released, but Gui remains in custody and has reportedly been barred from Swedish consular officials for the past three months.

The 52-year-old bookseller appeared on Chinese state television in January for an emotional confession, where he claimed he had surrendered himself for a hit-and-run conviction from 12 years ago. However, his daughter says the confession was “clearly staged” and he is being detained without cause. She has also denied China’s claim that he gave up his Swedish citizenship (as Gui’s colleague and fellow detainee, British passport-holder Lee Bo, purportedly did).

International pressure on China to release the booksellers has continued to mount, with the U.S. and E.U. both condemning China’s perceived jurisdictional overreach, thus far to no avail.

“I still haven’t been told where he is, how he is being treated, or what his legal status is,” Gui’s daughter said. 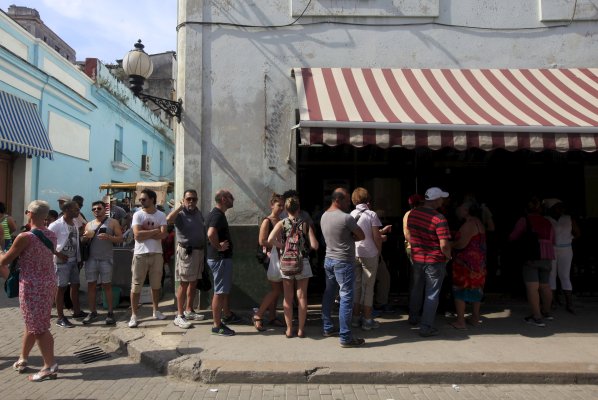 Cubans Will Be Allowed to Set Up Businesses
Next Up: Editor's Pick