After being marked by the Night’s King while in a vision in the fifth episode of Game of Thrones‘ sixth season, Bran Stark is told by the Three-Eyed Raven that he is no longer safe in the cave under the giant weirwood tree. “You must leave, all of you,” he says, adding that Bran’s training must now be expedited. “The time has come…for you to become me.”

However, as the Three-Eyed Raven desperately tries to catch his mentee up on everything he needs to know about the past, the White Walkers show up with their army of wights, leading to everyone inside the cave — including poor Hodor — sacrificing themselves to allow Meera and Bran to escape.

While it’s clear Bran is not ready for the power he now holds, a detail from an earlier scene may reveal the magnitude of his responsibility is even greater than expected. During the episode’s first flashback scene, viewers learned that it was the Children of the Forest who created the White Walkers thousands of years ago. The camera also panned momentarily over a carving of a face in a weirwood tree — a face that bore a remarkable resemblance to that of the Three-Eyed Raven.

Read More: Game of Thrones’ Bran Stark Speaks Out About That Tragic Twist

This similarity —which was pointed out by Reddit user McPir8 — could indicate that the Three-Eyed Raven had not only been around for much longer than he let on, but also that he was important enough to be carved into a heart tree, one of the sacred weirwood trees found in the center of a Godswood.

Basically, Bran may have inherited the powers of a godlike figure, which seems like it could have far-reaching implications in the Thrones universe. 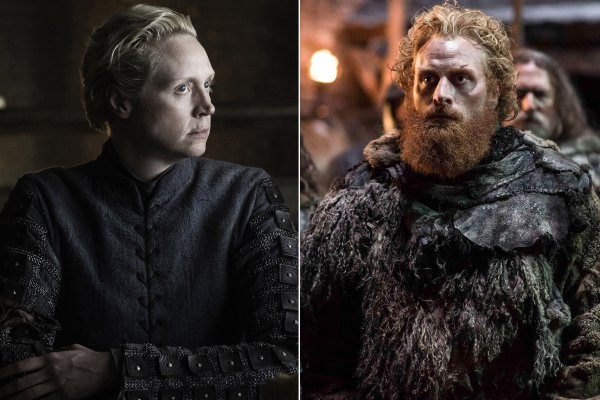 Here's How Gwendoline Christie Feels About the Brienne-Tormund Romance on Game of Thrones
Next Up: Editor's Pick