Sen. Rand Paul speaks at the National Rifle Association's NRA-ILA Leadership Forum during the NRA Convention at the Kentucky Exposition Center in Louisville, Kentucky on May 20, 2016.
Scott Olson—Getty Images
Ideas
By Sen. Rand Paul
Paul is the junior U.S. Senator for Kentucky

This president has now been at war longer than any other in history. That must end.

“President Obama came into office seven years ago pledging to end the wars of his predecessor, George W. Bush,” the New York Times reported this month. “On May 6, with eight months left before he vacates the White House, Mr. Obama passed a somber, little-noticed milestone: He has now been at war longer than Mr. Bush, or any other American president.”

In his last months in office, you would think President Obama might be trying to wind down these seemingly never ending and growing series of wars. You would be wrong.

President Obama said he was ending the War in Afghanistan, but he had to expand it before he could end it; and yet it has not ended. Together Bush and Obama have now spent more than $100 billion on nation-building in Afghanistan, and still many doubt the ability of the Afghan government to stand on its own two feet.

While our bridges crumble here at home, President Obama continues the cycle of bombing and then replacing their infrastructure.

He brags of ending the Iraq war, but the war there hasn’t ended. The enemy has just changed names. Combat troops have slowly grown.

Air wars and “advisors” are now in Syria and Iraq. Last month the President declared he was sending 250 Special Operations Forces to Syria. Who goes to war with 250 soldiers?

President Obama spent $500 million to train 250 Syrian “moderates.” He proceeded to send ten of them into battle and they were captured within ten minutes and stripped of millions of dollars in weapons. Who sends ten soldiers to war?

“Mr. Obama, who won the Nobel Peace Prize in 2009 and spent his years in the White House trying to fulfill the promises he made as an antiwar candidate,” the New York Times continued, will “have a longer tour of duty as a wartime president than Franklin D. Roosevelt, Lyndon B. Johnson, Richard M. Nixon or his hero Abraham Lincoln.”

Remember “change?” Remember a candidate who said, “Yes we can?”

Then candidate Obama’s stated views on both war and the constitutional separation of war powers were among the few things I liked and admired about his policies.

But he has abandoned every shred of them in becoming an unconstitutional war starter.

There’s no question that President Obama has been presented with a difficult task in fighting ISIS. But key tenets of his administration’s foreign policy have only strengthened the Islamic State. James Baker, former Secretary of State under President George H.W. Bush, recently told the Senate Foreign Relations Committee that it was U.S. interventions in Iraq, Libya and Syria that helped create the instability that has benefited Islamic extremists. “Look where we are now in all three of those places: Syria, Iraq, Libya,” Baker said.

Even Obama now admits the U.S.’s 2011 intervention in Libya was the “worst mistake” of his presidency—but he doesn’t seem to learn from such mistakes as he continues to pursue similar goal-less and mindless interventions in Iraq and Syria.

And with what authority?

The Constitution explicitly gives the power to declare war to Congress. But this administration still continues to use Authorization for Use of Military Force (AUMF), which was passed way back in 2001 and 2003, and originally intended to give President George W. Bush the green light for the wars in Afghanistan and Iraq after 9/11, as justification for continuing military actions abroad today.

I will be introducing an amendment to the upcoming defense bill that will state in no uncertain terms that the President cannot use vague, out-of-date authorities to send our troops to war.

My amendment will state that it is the sense of the Senate that the 2001 9/11 AUMF and the 2002 Iraq war AUMF do not apply to today’s war in Iraq and Syria and that if war is to continue there must be a new declaration of war by Congress.

One generation cannot bind another generation to perpetual war. Our Constitution mandates that war be authorized by Congress. Period.

My colleagues who have taken an oath to uphold the Constitution should support my amendment or at least have the decency to debate it.

Think about it for a moment. These original authorizations were passed back when some of the men and women fighting in our current conflicts were still small children. No president—including this president—deserves this kind of extra-constitutional power.

The sacrifice we ask of our soldiers also deserves more respect.

Re-examining the proper legal relationship over congressional vs. executive authority is long overdue. Since 9/11, America has been in a perpetual war mode and largely without precedent in our history. The costs, in lives and dollars, of the last 15 years of our foreign policy have been staggering and the benefits are somewhere between questionable and negligible.

As James Madison wrote, “No nation can preserve its freedom in the midst of continual warfare.” Which is one reason why, again, the Constitution clearly puts war-making powers overwhelming in the hands of the legislature.

But don’t just take my word for it.

President Obama ran calling for a repeal of the very AUMF he now hides behind for unconstitutional warfare. In 2014, a reporter confronted White House Press Secretary Josh Earnest about the “irony in using as your legal justification for these airstrikes an authorization for military force that the President himself has called for repeal of.”

It is an irony. It’s also dangerous.

Whether our next President is the hawkish Hillary Clinton or a more unknown in Donald Trump, the next Presidents should have their constitutional bindings restored. All presidents should. The limits imposed by the Constitution were meant to be bipartisan. The Founders were very careful not to vest something as important as the decision to go to war to the whims of one person.

In 2013, President Obama said he wanted to get the U.S. “off a perpetual wartime footing” and that he looked “forward to engaging Congress and the American people in efforts to refine, and ultimately repeal, the AUMF’s mandate.”

I agree. So let’s have a debate about the current AUMF. We should end them. And we certainly should at least stand up and say if you want new wars, you need new congressional authority.

My amendment gives everyone that opportunity. 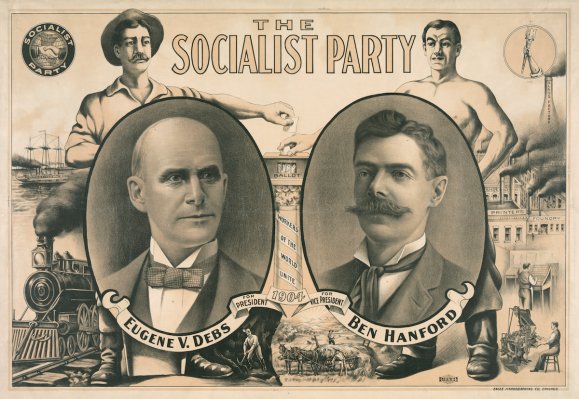 The Rise and Fall and Rise of Socialism in America
Next Up: Editor's Pick