Hillary Clinton and Donald Trump addressed a conference of Latino evangelical leaders via video message this past weekend to court their potential support. The Latin Leaders Fest is the annual national conference of the National Hispanic Christian Leadership Conference, an organization of more than 40,000 Latino evangelical churches. Some 1,200 people attended the event in Anaheim, which included Christian music performances and breakout sessions on topics like business, education, ministry and Israel.

NHCLC president Samuel Rodriguez, Jr., has been critical of Trump’s plan to deport the country’s 11 million undocumented immigrants and build a southern border wall, and he has been calling on Trump to apologize for his “hurtful, erroneous, and dangerous statements” on the Latino immigrant community. Trump—who shifted his tone on immigration in a private meeting with an NHCLC representative earlier this month—did not apologize in his video message.

Clinton directly addressed fears of undocumented immigrant deportation under a Trump presidency. “We have a candidate who wants to tear families apart, and forcibly deport 11 million undocumented immigrants, who calls Mexican rapists, who talks about banning Muslims from entering the country,” she said. “That is not who we are as a people. You can always count on me to fight for you.”

Clinton also talked about lessons of faith she has learned, including inspiration she draws from one of the Apostle Paul’s New Testament letters: “‘Do not grow weary in doing good, for in due season, you shall reap a harvest of blessings,'” she said, quoting Galatians 6:9.

Trump gave his message from his private plane. He did not address his personal faith or his deportation policy, but said he is “going to take care of minority unemployment…once and for all.” He said people that are poor are going to “pay nothing” in taxes, but when they will “start paying taxes after you are making a lot of money, and hopefully that is going to be soon.” On immigration, he said people will “come in legally,” but he is “going to stop the drugs.” 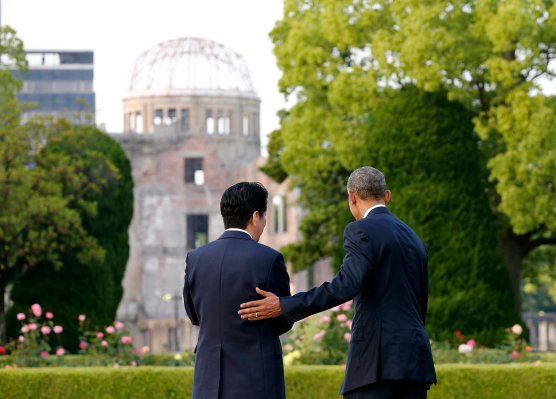 Scenes From President Obama's Historic Trip to Hiroshima
Next Up: Editor's Pick