Donald Trump speaks at a fundraising event in Lawrenceville, New Jersey on May 19, 2016.
Eduardo Munoz Alvarez—AFP/Getty Images
By Center for Responsive Politics / Will Tucker

Republican presidential front-runner Donald Trump has repeatedly trashed super PACs and claimed he would run as a candidate who couldn’t be bought. Through the end of April, it looked like no one really wanted to try that anyway.

That’s changing quickly. But one of the outside groups that has popped up to advocate for Trump has raised less than $1.1 million — a practically trifling amount by presidential super PAC standards — and had just more than $65,000 in cash on hand at the end of April, according to new campaign finance reports filed with the Federal Election Commission. The filings show just how far the group, Great America PAC, has to go to reach the big leagues of political money, essentially starting from scratch as far as megadonors go — which likely is why the group decided to release this week the names of some bigger-name supporters who aren’t listed in the latest FEC report but presumably will be in the one covering the month of May.

Great America has supported Trump — who finished off his last remaining major GOP rival, Sen. Ted Cruz of Texas, in early May — with a middling $2.1 million in independent expenditures so far this cycle.

The reality TV star’s campaign continues to say it “doesn’t have super PACs,” though the candidate has signaled he doesn’t mind super PAC money helping the Republican party. Nevertheless, Great America finds itself competing with an even newer pro-Trump super PAC, the Committee for American Sovereignty, which registered with the FEC on April 8 and hasn’t filed a report showing its fundraising or spending yet. It has publicized its own list of well-known GOP backers and has the involvement of people who apparently are close to Trump.

Haim and Cheryl Saban together gave another $3 million to Priorities, the largest of a coalition of outside groups supporting Clinton’s presidential bid. That puts the couple’s total contributions to the group at $10 million. Daniel Abraham, another repeat donor to Priorities, gave $1 million – he’s now $3 million. Jon Stryker, also a go-to liberal megadonor, dropped his first $500,000 into Priorities’ coffers since 2012, when it was the pro-Barack Obama vehicle; then, he gave the group $2 million. Stryker is also a regular giver to House Majority PAC, which supports Democratic House candidates; he’s given that super PAC more than $2 million over the last several years.

While major Clinton ally and former hedge funder George Soros didn’t give to Priorities last month — he’s shelled out $7 million for the group already — his son carried on the family tradition. Alexander Soros cut a $1 million check on April 30.

The younger Soros, like his father, serves on the board of nonprofit organizations and started his own philanthropic foundation. The Priorities donation is certainly his largest in the realm of federal politics. And at age 30, he’s far younger than the typical super PAC donor.

Priorities spent more than $6.6 million in April. Most of that — $5.8 million – went to a single firm, Precision Network LLC, for “digital ad buy reservation.” The group still had $46.7 million in the bank, and in fact spent some of those reserves this past week with a major TV ad campaign attacking Trump.

But as Priorities’ financial picture looked a little brighter, Trump’s rivals to his right exhausted nearly all of their resources in April. Support for Our Principles PAC — the group that was launched to try to prevent Trump from winning the nomination — dried up, more or less dying with Florida Sen. Marco Rubio‘s presidential candidacy in March. Receipts dropped from $8.3 million in March to just $2.7 million last month.

Paul Singer, the billionaire hedge fund manager, and Connecticut investor Michael Vlock, an erstwhile donor to Rubio’s Conservative Solutions PAC, each gave $1 million to Our Principles in April. But the PAC spent more than it took in for the month, about $3.1 million to $2.7 million, and ended the month with a paltry $67,842 on hand.

That Singer is one of the last backers, it seems, of what became a $19 million-plus unsuccessful effort to derail Trump’s march to the Republican nomination could be telling. His contributions can be a signal for other major Republican donors, especially those also in the hedge fund industry. How Singer goes, so too might other big Republican financiers.

There are still some big slugs of cash sitting around waiting to be disbursed somehow, however. As of April 30, more than $17 million remained in the coffers of Right to Rise, the super PAC formed to give monetary muscle to former Florida Gov. Jeb Bush’s White House bid. Bush’s own campaign, though, lacked much strength, and he halted his run in February. 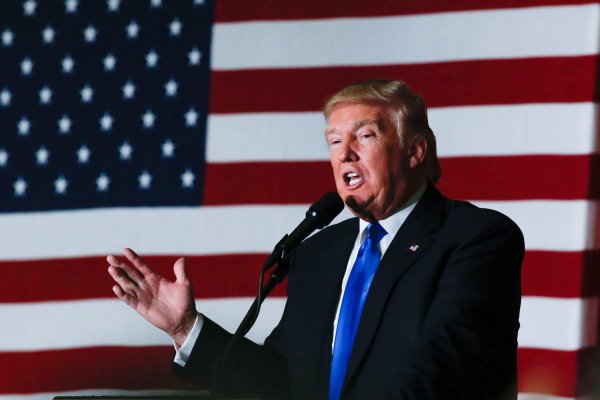 Evangelicals Look to Test Trump
Next Up: Editor's Pick