During April, White House hopefuls, their supportive super PACs and other political committees raced past the $1 billion mark achieved in March, adding another $150 million or so to already historic spending totals.

Here’s a rundown of the more telling — and curious — numbers the Center for Public Integrity found lurking in a new round of federal campaign disclosures:

$9,659,100: Amount billionaire businessman Donald Trump raised in April, as he raced toward clinching the Republican Party’s presidential nomination. Of that sum, about 78 percent came from his own funds — including another $7.5 million in loans to his campaign. To date, Trump has now loaned his campaign more than $43 million, although the loans are loans in name only — Trump says he has no intention of recouping the cash.

$9,403,014: What Sen. Ted Cruz of Texas still had left in his presidential campaign account, three days before he dropped out of the presidential race after Trump obliterated him in the Indiana primary. Despite this reserve, plus tens of millions of dollars more controlled by pro-Cruz super PACs, Cruz declared that his path forward had “been foreclosed.” Cruz has options for his surplus millions, including transferring it to his U.S. Senate committee — the Texan has already announced he’ll seek re-election in 2018. Cruz could also donate his stash to other political candidates, Republican party committees or even charitable outfits.

$5,796,718: The amount of campaign cash that remains for Democratic presidential candidate Bernie Sanders as of April 30. Sanders burned through roughly $38.6 million last month, spending millions on TV advertising alone. The U.S. senator from Vermont outraised his rival, Hillary Clinton, by roughly $2 million in April — showing that Sanders still has some steam left to stay in the race, even if his odds of winning the Democratic nomination are nearly nil. But Clinton’s campaign boasts $30.2 million in reserve — say nothing of the tens of millions of dollars pro-Clinton super PACs have at their disposal.

$3.7 million: The amount donors poured into the fundraising arm of a network of pro-Cruz super PACs in April, a few weeks before Cruz’s presidential bid fell apart. The largest single individual contribution to Trusted Leadership PAC in April was $1 million from Benjamin Klein, the chief executive officer of Platinum Health Care. Klein has been linked to a series of limited liability companies that had previously made contributions to super PACs backing Cruz. Republican megadonor John Childs also gave $100,000 in April, bringing his total contributions to Trusted Leadership PAC to $300,000. Additionally, the group also took in $250,000 from Amway President Richard DeVos and $75,000 from mining company Murray Energy Corp. and its PAC.

$1,249,830: Surplus cash that Sen. Marco Rubio’s presidential campaign enjoyed going into May after its debts are subtracted from available cash. While not much of a consolation prize — Rubio unceremoniously quit the race on March 15 after winning just three primaries and caucuses — his presidential committee is in better shape than those of many White House also-rans, who’ve carried debt on their books for months, even years. Rubio still must settle up with several vendors who are collectively owed more than $2 million, including more than $15,000 to tiny Patrick Henry College in Virginia, where Rubio conducted a campaign event on Feb. 28.

$177,488: How much scratch the Trump campaign spent on hats during April.

$105,665: What CARLY for America, a super PAC supporting businesswoman Carly Fiorina’s presidential bid, spent in April, despite Fiorina dropping out in February. Expenses included roughly $36,000 in consulting fees to group leader Stephen DeMaura and $62,500 in direct mail costs. The group reported having about $740,000 in remaining cash through April. Fiorina has said the super PAC will live on to “help conservative outsiders win in November.” But donors didn’t flock to it, even after Fiorina briefly served as Cruz’s de facto running mate in April (before he withdrew, too). How much did CARLY for America raise in April? Not a cent.

$100,000: The amount of money Scott Bessent gave pro-John Kasich super PAC New Day for America days before Kasich, Ohio’s governor, quit his increasingly quixotic bid for the Republican presidential nomination. Who is Scott Bessent? He’s a hedge fund manager with deep professional ties to George Soros, the billionaire financier and Democratic megadonor who’s poured millions of dollars into pro-Clinton efforts this election cycle. Bessent had previously contributed $250,000 to the pro-Kasich super PAC. He has likewise given cash to a variety of other Democratic and Republican candidates and committees over the years, including $25,000 in 2013 to pro-Clinton outfit Ready for Hillary PAC. Another New Day for America donor is tied to Soros, too. Stanley Druckenmiller, who once managed money for Soros, donated $500,000 to the pro-Kasich super PAC.

$74,866: What Rubio’s presidential committee earned in April from renting supporters’ personal information to a data broker.

$73,368: Amount raised in April by former Democratic presidential candidate Martin O’Malley, the former Maryland governor who dropped out of the race after a disappointing third-place finish in the Iowa caucuses. These days, O’Malley continues to maintain a profile in his home state. While he has not endorsed in the presidential race, O’Malley did endorse Democratic Rep. Chris Van Hollen ahead of last month’s heated U.S. Senate primary in Maryland, in which Van Hollen prevailed. And in April, Maryland politicians accounted for about one-quarter of O’Malley’s campaign receipts. His most recent donors include the PACs of Sen. Ben Cardin, Rep. Steny Hoyer and Sen. Barbara Mikulski, as well as the campaigns of Reps. Elijah Cummings and John Sarbanes. Former Sen. Paul Sarbanes and former Baltimore Mayor Thomas D’Alesandro III — the brother of House Minority Leader Nancy Pelosi, D-Calif. — also made personal contributions to O’Malley’s failed presidential campaign in April.

$67,842: What anti-Trump Our Principles PAC had left in the bank at the end of April after saturating airwaves with attack ads for months — a tactic that proved unsuccessful in damaging The Donald. Republican megadonor Paul Singer injected the super PAC with $1 million — roughly one third of the group’s April haul — on April 27. Cruz and Kasich dropped out of the race the following week.

$24,255: Amount pro-Cruz Keep the Promise PAC paid to the Charlotte Motor Speedway for a mid-March rally. The guest list: Soon-to-be running mate Fiorina, conservative pundit Glenn Beck and … Cruz himself. Cruz was a regular “special guest” at Keep the Promise PAC rallies, causing some detractors — including the Trump campaign — to question whether this violated campaign finance laws, which forbid campaigns and supportive super PACs from coordinating certain efforts.

$2,146: What the seemingly insolvent Constitution Party National Committee owed the Internal Revenue Service as of April 30, according to its latest campaign finance report. This is particularly notable, since the Constitution Party asserts the IRS is an “illicit and unconstitutional agency” that should be “abolished” — the party headquarters phone number is 1-800-2-VETO-IRS. But Constitution Party Chairman Frank Fluckiger says the reported debt is one big misunderstanding. “As far as I am aware the debt to which you refer on the FEC report is non-existent,” Fluckiger said, adding that a combination of software problems and “improper reporting” contributed to the accounting snafu. Added Constitution Party Treasurer Gerald F. Kilpatrick: “We are in discussions with the FEC as to whether this can be corrected in a future filing or if we need to amend our previous filings.”

2020: The year in which several senators, to whom Google’s PAC donated money in April, are next up for re-election. Beneficiaries of this ultra-early cash include Sens. Mark Warner, D-Va.; Dan Sullivan, R-Alaska and Tom Cotton, R-Ark.

$294.57: How much the Trump campaign reported spending in February at the “No 1 China” restaurant in Greenville, South Carolina. On the campaign trail, Trump has accused China of “rape” against the United States and talks incessantly about the country.

99.99: Percentage of NextGen Climate Action’s total April income contributed by its founder Tom Steyer. Steyer, a hedge fund manager, environmentalist and Democratic megadonor, gave $7 million to NextGen last month alone, bringing his total for the election cycle to $24 million. The super PAC has so far spent about $350,000 on advertising attacking Trump and plans to spend $25 million this cycle turning out young voters.

10: Number of people who in April accounted for 95 percent of the $8.56 million raised by pro-Clinton super PAC Priorities USA Action, which just launched a massive (and excoriating) advertising campaign against Trump. Several of the super PAC’s most recent bankrollers have strong ties to either Wall Street or Hollywood, including entertainment mogul Haim Saban, venture capitalist Jay Robert Pritzker and financier Herbert Sandler.

$0: How much the Twitter, Inc. #PAC gave federal political candidates in April, extending a stinginess streak for the committee, which formed in August 2013. Until last year, the PAC had never made a federal-level contribution. In November, PAC leaders told the Center for Public Integrity that the committee would soon contribute money to political campaigns, and in December, it gave $1,000 each to Sens. Chuck Grassley, R-Iowa; Mike Lee, R-Utah; and Ron Wyden, D-Ore.; and Rep. Karen Bass, D-Calif. But the PAC has yet, this year, to tweet cash to any politician. (For the record, people are allowed to tweet cash to politicians.)

Chris Zubak-Skees contributed to this report 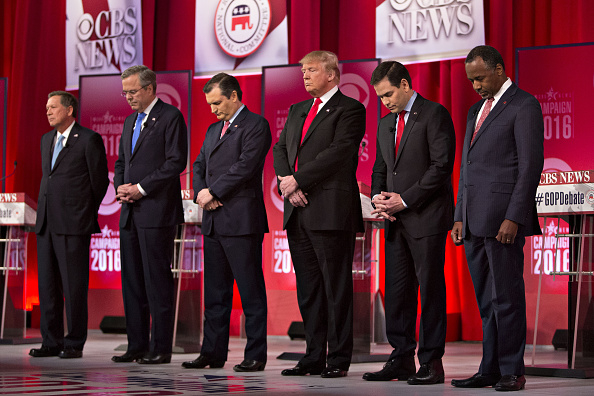