Katsuya Okada, leader of the main opposition Democratic Party, unveils the party's logo at a press conference in Tokyo on May 19, 2016.
Kyodo/Getty Images
By Julia Zorthian

Japan’s opposition Democratic Party revealed its new logo Thursday after a contest which attracted 3,000 entries — but the winning design has .

The logo is fashioned out of two people joining arms to form an ‘M’ for the party’s Japanese name, Minshinto, the Japan Times reports. The partnership illustrated by the red and blue figures is intended to echo how the party was formed when in March when the Democratic Party of Japan merged with others. But others note it seems to show one figure touching the rear of another.

The logo’s critics also noted how it resembles the logo for the Imuraya Co., in which two ‘i’s’ make an ‘M.’ The party’s lawyer said they obtained permission from the confectionary company to use the similar image.

The party’s president Katsuya Okada described the progressive logo as having “a feeling of vibrancy.” Ultimately, he said, “It’s a good logo.” 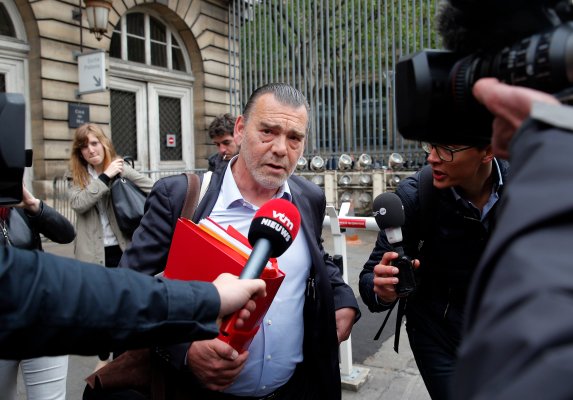